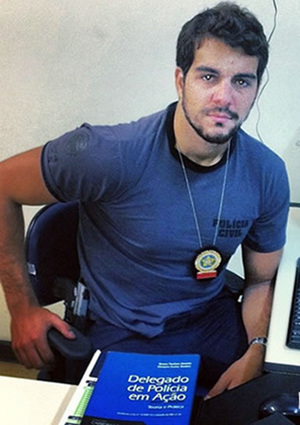 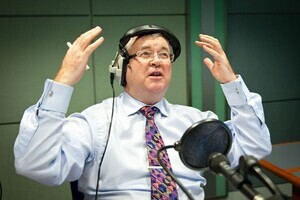 A fuming Joe Duffy (centre) challenges unruffled Rio Police commissioner [a commissioner is the second-in-command of a civil police division in Brazil] Aloysio Falcão (top) about the filming of the arrest of “distressed 71-year-old” Pat Hickey among other gripes on RTÉ Radio One’s Liveline.

Joe Duffy: “Commissioner Aloysio Falcão of the Rio de Janeiro police and one of the lead investigators in this case, good afternoon.”

Aloysio Falcão: “Good afternoon, how are you?”

Duffy: “Good, thank you and I hope you are aware also, are you aware Commissioner, that in Ireland this has been the biggest story in the last 10 days?”

Duffy: “Why did you decide to film the arrest of Pat Hickey.

Falcão: “Because we knew that Pat Hickey was the guy who [unintelligible]

Falcão: “In Brazil, ticket touting is a crime, you know.  It’s a serious crime, I had to respect…”

Falcão: “I did the arrest because I had to respect the law.”

Duffy: “Is every arrest in Brazil filmed?”

Duffy: “So why did you film this man being arrested?”

Falcão: “I had to do what the judge said on the warrant.  When I arrested him I  sent him to the hospital to check everything out, he spent in the hospital one day…”

Duffy: “Hmm well as I said last week when all of this was happening, there might have been a misunderstanding.  It is a different language.  Are you saying the Judge ordered the arrest of Pat Hickey being filmed.”

Duffy: “So are you saying the judge said I want to see video and film evidence I want to see the film, the movie of this man being arrested.”

Falcão: “Not the judge’s order, it’s like the media.  We didn’t authorise the media, you know.”

Duffy: “And Commissioner, where does the investigation stand now.  Is there any possibility that Pat Hickey who, as you know is a 71 year old man, you know and you had to call the doctor, that  Hickey could be released on bail and out of that prison.”

Falcão: “Yeah, we have a kind of domiciliary prison where the guy is older than 80 or is in bad health, his lawyers are trying to get this kind of prison for him to be in.”

Duffy: “So you would be in favour of Pat Hickey being released  from prison once he does not leave Rio, is that correct?”

Falcão: “Sure.  The Brazilian system is not unfair [unintelligible].  I’m going to talk to the judge today.”

Duffy: “So you’re going to talk to the judge today to say you have no objection to Pat Hickey being released.  Have you any objection to him leaving Brazil?”

Falcão: “Yeah. He has to stay in Brazil because he has more questions about more people who are being arrested… he can be in domiciliary jail but it’s the judge’s decision, I can’t decide that, you know.”

Duffy: “But can you – is it within your power to say to the judge we will allow Pat Hickey to hold in a hotel in Rio so long as we have his passport and he cannot leave Brazil, is that your opinion?”

Falcão: “I have the power to talk to the judge but not to release him from jail.”

Duffy: “Yes but once he stays in Brazil.”

Falcão: “Yeah but we don’t have this power you know, it’s the judge’s decision.

Duffy: “But approximately Commissioner when do you hope to hand the file to the judge and say we’ve done all our investigations now you decide when is that a week a month, how long ?”

Duffy: “So if Mr Hickey –  which he vehemently asserts, as does Mr Mallon, that they were innocent, you’re saying well we will not have a decision on that from the Brazilian system for up to 3 months?”

Falcão: “If they are innocent for sure we have a decision, the Brazilian court, it’s Brazilian law I don’t know how it works in Ireland but we have to make sure that people don’t run away from the country otherwise it’s going to be impossible to inquire them.”

Duffy: “Have you asked Interpol to help?”

Falcão: “Yeah, for sure.  I am in contact with the Interpol the Interpol is going to help the Brazilian police.”

Duffy: “And what country are Interpol going to ask to assist?”

Falcão: “Interpol is based in France.

Duffy: “Yes, I know that, it’s based in Lyon but are you saying to Interpol, can you get information from Ireland?”

Falcão: “I can’t tell you about the information but what I can tell you is that I made contact with Interpol they are helping the Brazilian police.”

Duffy: “Have you had any representations from the Irish government?”

Duffy: “But have you contacted the Irish government via our embassy?”

Duffy: “Well, Commissioner, a number of politicians in Ireland, some in opposition, some in Government, Minister Simon Coveney, Shane Ross made a reference to it as well, as the leader of the Labour Party said this is not the way we do things in Ireland, I’m quoting a onetime leader of the Labour Party, can you understand that the arrest of this man, the filming of the arrest the immediate removal, okay you took him to a hospital, and his incarceration in prison, to some people in Ireland to a lot of people I think in fairness they don’t think that is very fair.”

Falcão: “I know.  What I can tell you is that the police treated him very well.  We left him in the hospital for one day, he then went to the prison when the doctor examined him met him and said well now he’s okay… I talked to him and his lawyer always, always you know.”

Duffy: “You know this cocktail party, this sting operation where you sent undercover policeman to this cocktail party does that mean you have been on, when did this case open, did it open when the Olympics started or had it started a few years ago, how long have you been on this case?”

Falcão: “We had a lot of investigation at 2014 at the World Cup football, we arrested a director of THG and we know that THG was trying to get credentials for the Games, that’s why we started the investigation. Two years ago.”

Duffy: “You were watching THG before the Olympics.  Before they arrived, were you aware of the arrival of the Irish Olympic Committee, were you suspicious of a connection then.

Falcão: “The Olympic Irish Council was suspected when we found maybe 800 tickets and all those tickets were designated for the Irish Olympic contingent.”

Duffy: “Whey did you put Pat Hickey’s boarding card and his accreditation, why did you put them  on your table for those photographs you were at?”

Falcão: “I didn’t put them on my table.”

Duffy: “Ah now no hang on hang on the media didn’t have his passport why did you put his passport on the table

Falcão: “We confiscated it.”

Duffy: “Oh what you have okay okay, that’s the way in Brazil, okay. And did Pat Hickey have a second passport?”

Falcão: “He had a second passport he gave to the police, yes.”

Duffy: “And is the second passport Irish?”

Duffy: “But you can’t have two passports.  And both passports were valid?”

Falcão: “Yeah, yeah, I think because he travels a lot he has a second passport.”

Duffy: “A spare one. But you’re adamant It wasn’t a false passport, it was a spare passport.”

Duffy: “But there’s nothing wrong with that is there?”

Duffy: “Okay Commissioner thank you for your time.”

Falcão: “Okay thank you I appreciate that also.  Sorry for the question I didn’t answer.  It’s difficult to talk over the phone.  I’m not good at the language.”

Duffy: “But given that you raised the question you didn’t answer, do you regret, are you sorry that you let the cameras in to a 71 year old man in distress?

Falcão: “No, I didn’t authorise that, I didn’t.  It was a problem with the hotel security.”

Falcão: “ I can tell you, I didn’t like what happened.”

Duffy: “And you’re saying Pat Hickey requested that he be taken out of the hotel privately?”

Falcão: “Yes, the basement, I authorised that.”

Who Does Joe Call?

The Man Who Loves JobBridge