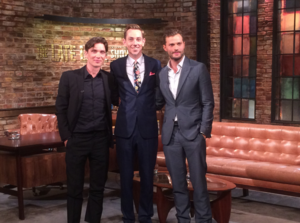 “The fame aspect that comes with being a working actor does not intrigue me in the slightest. I think something like being Irish helps, and my friends. There’s just no allowance for it… In your life, no matter what happens or how much notoriety you gain through your work, the fundamentals of your life don’t change. I hope not.

“Your wife, your kids, your family and your friends, all that stuff, the stuff that makes you, doesn’t change. On nights like this when you go to a premiere and it all seems crazy, it’s all very heightened but every day is totally normal. It’s just a job, you go to work and do your job and then that’s it.”