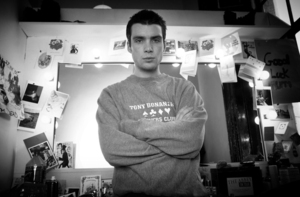 A young Cilian Murphy rehearsing for Neil Labute’s The Shape of Things at the Gate Theatre, Dublin in 2002.

“The fame aspect that comes with being a working actor does not intrigue me in the slightest. I think something like being Irish helps, and my friends. There’s just no allowance for it… In your life, no matter what happens or how much notoriety you gain through your work, the fundamentals of your life don’t change. I hope not.

“Your wife, your kids, your family and your friends, all that stuff, the stuff that makes you, doesn’t change. On nights like this when you go to a premiere and it all seems crazy, it’s all very heightened but every day is totally normal. It’s just a job, you go to work and do your job and then that’s it.”

A comment left under an interview with Cork actor Cillian Murphy in The Guardian at the weekend.

Cillian Murphy: ‘Is this it, for the rest of my days?’ (The Guardian)

A video trailer for Ballyturk.

Ballyturk is Enda Walsh’s newest work, starring an amazing cast of Cillian Murphy, Mikel Murfi and Stephen Rea. Its world premiere takes place tonight in Galway, as part of the Galway International Arts Festival. It sold out in Galway in record time but the good news is that it continues on to The Olympia in Dublin, Cork Opera House and the National Theatre in London. For more information on those dates here…