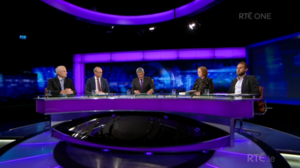 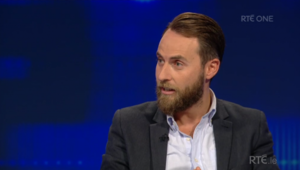 From top: The panel on last night’s Prime Time and Dr Aidan Regan, of UCD

Dr Aidan Regan: “This is the crucial point that really wasn’t picked up either, in the preceding interviews, the ruling that the Commission have issued basically states that Ireland should apply its tax laws, 12.5% consistently.

“It’s basically said that allowing Apple to set up a subsidiary, split it into two companies, allow them to transfer the sales profits to one of those companies, the head office, that is basically stateless, it’s in the cloud, ensures that they don’t pay tax – call it aggressive tax planning, call it corporate tax avoidance.”

“Now the point from the Commission’s perspective is that that’s perfectly legal and it has been legal. Now, the Government has since closed it. The argument of the Commission is that’s illegal state aid. So this is an argument about competition. The Commission is saying that Ireland has broke the laws of the European Union by facilitating a large multinational to have comparative advantage over its competitors in the market.

“So it’s not actually saying Ireland’s laws were wrong, it’s not about morality, it’s not about legality. They accept that was perfectly legal. They’re pointing out that it’s illegal to facilitate a company, like Apple.”

Dr Regan: “Possibly and this, I think, is what we don’t fully know. The full ruling is confidential and I would be very curious to see precisely what it was about those two particular tax rulings in 1991 and 2007 that clearly signal to Apple that it was OK for them to avoid paying the 12.5% by transferring their profits to another company and effectively pay zero.”

36 thoughts on “‘This Is An Argument About Competition’”