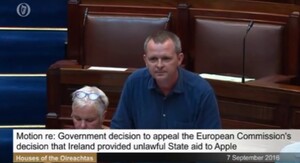 “I wish to address the integrity of our tax system. The laughable suggestion is that we must lodge the [Apple tax ruling] appeal in order to defend its integrity.

The first of the tax rulings was in 1991, the era of Ansbacher and Charlie Haughey. Via Ansbacher accounts, the Irish rich had been siphoning off money that was onshore but supposedly offshore since 1971.

Only political pressure, outrage and exposure, not Revenue, forced the establishment of the McCracken tribunal.

It was only in 1999 that Revenue finally decided to start investigating the matter and uncovering the funds. Is our tax system so covered in glory that we would not question its integrity? I am afraid not.

The tax ruling of 2007 is what I really want to discuss. Something was raised at the committee about which we were not allowed to ask questions of Apple and Facebook because the Government side turned off the cameras and voted down the proposal.

A paper produced by the Department of Finance, authored by Mr. Seamus Coffey, showed some of the figures. Nobody bothered to read them, as is so often the case, but the truth is in them.

I refer our economic and political correspondents to pages 27 and 28 of the Department’s paper on Ireland’s effective corporate tax rates. They show something incredible.

The average amount of what are called deductions – parts of companies’ profits that can be written off from their tax liabilities as costs – jumped from an average of approximately €2 billion in 2004 and 2005 to €21 billion in 2011.

God knows what they were subsequently, as we do not have the figures and cannot get them from Revenue for four or five years after the fact, which is another scandal.

The amount of tax at 12.5% that these companies could write off jumped over four or five years by €19 billion.

The greatest jump in that write-off came after the 2007 ruling, when it increased from €6 billion to €19 billion before increasing to €21 billion within a year or two.

It may well have increased much more afterwards but we do not have those figures. We need to see them.

From 2007, total taxable income in the corporate sector dropped from €56 billion to €37 billion. That nearly €20 billion is almost exactly the same as the deductions allowed.

The paper helpfully mentions that this can be explained by patent royalties paid by certain multinationals to their subsidiaries. The ruling gave them certainty that they would be allowed to write their own tax bills indefinitely. The Government colluded to cover this up until now.

The paper that the Government distributed last night and that is also a part of the cover up helpfully tells us about a few points.

In 1991, a basis proposed by Apple for determining the net profits of Apple Computers Accessories, now the ASI branch, was agreed by Revenue.

Apple told Revenue that it had a proposal on how the latter should calculate its profits. It did that again in 2007.

Does any other taxpayer get the opportunity to tell Revenue how to calculate his or her tax bill?

When it comes to Apple, Google and Facebook, however, we protect them and they can make their own tax arrangements.

This is what happened. No arm’s length principle, no equality, no tax justice. They tell Revenue how to calculate their tax and Revenue does it.

Please do not tell me that, when the allowable deductions from profits jump by approximately €18 billion or €19 billion in two or three years, the Government and Revenue did not notice or that the Government did not know that these profits were being shifted to companies that had tax residencies nowhere in the world.

…Everybody knew that they were involved in massive tax evasion but we chose to turn a blind eye and, indeed, to put in place the mechanisms that allowed them to do it.

We then resisted the calls to close down that loophole. The Government now claims that it has done so but it has given a sunset clause under which the same companies and no other can avail of the double Irish until 2020.

In the meantime, the Government has developed a patent box that will allow them to do the same thing in a different way, that is, write off the profits generated from upgrading an iPhone or Apple computer against the cost of new innovations and developing new patents.

Apple is appealing, so we will not be able to spend the money anyway, but how much weaker would Apple’s case be if the Government accepted the ruling because it was true that we had done something wrong?

Everyone knows that we gave selective advantage to these corporations. I have just provided the hard evidence contained in Revenue’s tables, which show that Revenue must have known.If it and the Government did not notice this scale of profit shifting, they should be flung out on their ears. Of course they noticed it.

If we put up our hands and admit that this was wrong and that, as everyone knows, these companies were evading tax to the tune of billions of euro, Apple’s case against the European Commission would collapse.

Maybe Apple would pursue it, maybe it would not, but its case would be significantly weakened if we did the honest and fair thing from the point of view of our citizens.”

30 thoughts on “Defending Our Integrity”