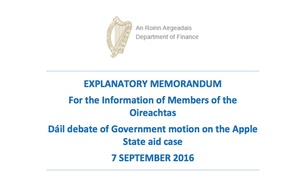 The Department of Finance have sent out a briefing document to TDs ahead of today’s debate on the EU’s Apple tax ruling.

In 1991, a basis proposed by Apple for determining Apple Computer Ltd’s Irish branch net profit was agreed by Revenue.

This was subject to the proviso that if the overall profit from the company was less than the figure resulting from this formula, that lower figure would be used for determining net profits of the branch.

In 2007, a revised approach for remunerating the Irish branch of AOE was agreed which was based on:

(a) a 10-20% margin on branch operating costs, excluding costs not attributable to the Irish branch, and

(b) an IP return of 1-9% of branch turnover in respect of the accumulated manufacturing process technology of the Irish branch.

Sweetheart deal, state aid or nothing to see here?

Read the document in full here

53 thoughts on “The Apple Deal ‘Explained’”