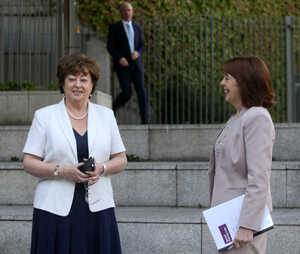 Before he quit The Social Democrats and at a time of enormous growth and change for the party Stephen Donnelly seemed to be stepping back.

“I didn’t get up the pole for Stephen Donnelly”

This was the message I got from a (male) member of my volunteer group in Dublin Mid-West and brings me on to a subject I feel it would be unfair of me not to address, namely this week’s news regarding the departure of my friend and former colleague Stephen Donnelly from the party I both work for currently and stood for at the last General Election.

While my volunteer was clearly joking, the underlying message is in fact the most important point to remember in what can very often descend into a media bubble about leaders and personalities and individuals.

The bigger picture can sometimes be lost in the midst of all that so it’s important to put it back to the fore. The bigger picture here is that no party, no matter its size can ever be dependent on one individual.

Social Democracy is a movement; it is a project which we’ve said from the get-go will be a long-term project and a constant inching towards a social democratic vision for Irish society.

The same is true of other political projects no matter where along their timeline they may be. If Michéal Martin left Fianna Fáil right now they would surely take a hit but it wouldn’t be the end of Fianna Fáil. Likewise for Fine Gael, Labour, Sinn Féin and every other party across Ireland and the world.

That text message was my volunteer telling me that despite the fact that Stephen was a colleague, a friend, an impressive performer, an accomplished parliamentarian and an astute mind, he was not the be all and end all of what we’re trying to achieve here and when my volunteer spent winter evenings dangling precariously from poles he didn’t do it because he was impressed by Stephen Donnelly.

And nor did he do it because he liked me personally, he did it because he fundamentally believed in the vision that the party; the movement, was putting forward in terms of honest politics, a fair society and a strong economy.

The values underpinning the party are Equality, Democracy, sustainability and progress. These are the things that got people involved in the first place; the things which encouraged people to leave their sofas and brave rainy evenings up poles, knocking on doors and leaflet dropping across Ireland.

Monday was a disappointing day for us. There’ll be many of those in politics and I entered into this, as did my colleagues with our eyes wide open.

The true test is how you weather those storms and move forward. We’ll do that and Stephen will do that, in different ways and in different directions and that’s fine, certainly we wish Stephen well on his journey wherever it may take him.

They say hindsight’s a great thing and that’s certainly true in this case. We’ve used the word ‘disengaged’ quite a bit and that’s because it’s the truth.

At a time of enormous growth and change for the party, Stephen seemed to step back. We’ve used the analogy before of the project being akin to building an aircraft while in flight and that really is indicative of the task at hand.

While we were caught up in the frenetic day to day work required for that task, Stephen’s disengagement was noticeable but I never truly believed his heart wasn’t in it to the extent he’d actually quit.

Stephen said in yesterday’s Irish independent that his ‘departure had been coming for some time’ so I guess his disengagement was, in hindsight, something more than just someone needing to take a breather at an inopportune time.

I can genuinely tell you I’ve no idea why Stephen’s heart left the project so soon after its commencement or why he chose to disengage in the way he did over the last few months.

But whatever his reasons, I can categorically say that there were no rows, no clashes and no drama. We only found out last Sunday that Stephen was leaving for definite. I guess you could channel Gwyneth and say it was, on Stephen’s part at least, a ‘conscious uncoupling’!

For our part the enormous workload hasn’t gotten any smaller by virtue of recent events and so we resume normal service post haste; the daily slog that is the backroom of the shiny face of politics you see in front of a camera; the late night meetings and conference calls and the weekend meetings that just can’t be avoided no matter the personal demands.

Now, we will renew our strength in putting our shoulder to the wheel and as we enter the new Dáil term we do so with a new staff team, an exciting list of political priorities and our inaugural National Conference to be held in Mid-November.

Our efforts will not be employed discussing travails that are par for the course in political life, they will be focused on delivering on the vision of Social Democracy we put forward and which encouraged people across the country to stick a cable tie between their teeth and get up the pole.

81 thoughts on “The Man Who Wasn’t There”