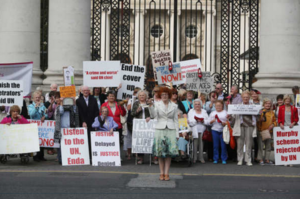 But the Sunday Business Post has learned that survivors have received letters from a solicitors’ firm seeking addition legal costs out of their awards.

The firm seeking additional legal costs from these awards is MacGeehin Toale.

It has taken a number of test cases in the courts on behalf of survivors of symphysiotomy, with a view to taking more if they were successful.

A letter previously sent by Colm MacGeehin to a survivor explained that doctors would have to be paid €2,000 to produce a medical report on their injuries. “The cost of these reports can be seen as an investment in cases that, should they succeed, are likely to lead to significant awards,” he wrote.

But so far, around 386 women have decided to accept payments instead from the State’s Symphysiotomy Payments Scheme, which accounts for the majority of those affected.

This means that their legal proceedings are automatically dropped because they had to agree not to take any legal action against the state or the hospitals which performed the operations.

But MacGeehin Toale has been contacting women it represented for further legal costs for work which has not been covered by the state scheme.

Colm MacGeehin has acted as the legal adviser to the Survivors of Symphysiotomy (SoS) campaign group. He is the former husband of the chair of the group, Marie O’Connor.

Their son, barrister Ruadhán Mac Aodháin, has been described by SoS as “the main junior counsel” working on the cases, He also works as a legal adviser to the SoS group.

A Choice Between Compensation And Justice