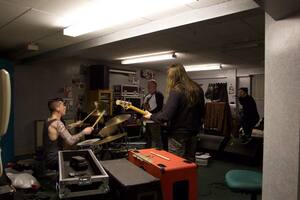 By Any Means – touring Ireland this weekend with Raging Speedhorn

01. Hailing from Belfast, By Any Means are a hardcore four-piece plying chunky, spiky riffs in the genre’s tradition.

02. Founded in 2009, the band released its debut E.P. early the following year, and followed up with their debut full-length, Built on Respect, in November 2012.

03. Streaming above is the band’s most recent release, the Bearcat Sessions E.P., recorded at Bearcat Studios in Belfast.

04. Catch them this weekend in support of returning UK metallers Raging Speedhorn. Friday sees them hit the Crane Lane Theatre in Cork, on Saturday they’ll be at On the Rox in Dublin, and proceedings finish on Sunday at the Voodoo in Belfast. Dublin metallers Dead Label are also opening each night.

Verdict: Good, honest, no-nonsense hardcore. Not for everyone, but plenty there for fans of the genre.

3 thoughts on “You May Like This: By Any Means”