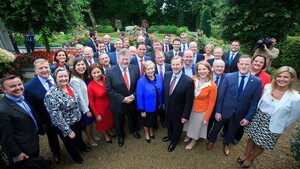 You may recall how members of Fine Gael were to be briefed by Marion Coy, chair of the Collins Institute, at the party’s think-in yesterday – in relation to a report she carried out about the party’s poor performance in the general election.

Fine Gael TD Kate O’Connell was also to brief the party’s members about a second, separate report about the election.

Ms O’Connell and John Downing, of the Irish Independent, spoke to Sean O’Rourke this morning about the reports.

Seán O’Rourke: “Kate O’Connell, you, as I said, with party colleagues, were part of a group tasked with identifying what went wrong for Fine Gael in the election which led to the loss of so many seats. You finished this election with 50 seats compared to 76 at the previous one in 2011. So, summarise your findings.”

Kate O’Connell: “Well, I suppose, yesterday what we presented was a synopsis of some of the recommendations in the report, the entire report will be published in due course. But there was various weaknesses in the campaign such as, obviously, the message, I think is well, been well discussed at this stage. That didn’t seem to resonate with the voters. We seemed to somehow lose sight of, we expected that everybody thought that it was based on the economy and they would vote for us based on the fact that, as a party, we had had brought Ireland from the brink but, as it turned out, people weren’t thinking that way. And, for some reason, we didn’t seem to get our message out there to the people. And if we did get a message out there, the people didn’t really like it. So, I suppose, there was an issue with communication of our message. To some extent, people didn’t really know why you would vote Fine Gael over perhaps other parties. So, there was a messaging issue. As there seems to have been a very, very close group of people that perhaps in control and there was very little influence from outside. There was an overuse of commercial focus groups and that sort of thing…”

O’Rourke: “Yeah, I’m just looking here, in the archive. Fine Gael spent over €200,000 of State funding on opinion polling and focus groups last year in the run-up the February election.”

O’Connell: “Well, I mean, you’ve a pot of money to spend and, as a Fine Gaeler, we were always involved in fundraising activities and I would really like to see the money being spent and resources are scarce. It’s a big organisation…”

O’Connell: “Resources in the right direction.”

O’Rourke: “On top of which another €100,000 of public money was spent on a website and social media services and this is just according to returns published by the Standards In Public Office Commission [Sipo]. I mean that seems to have been money down the drain?”

O’Connell: “Well, I’m sure there are some elements that worked out and I’m not privy to all the data from that research but, what I would say, is that it does seem that we didn’t get very good bang for our buck…”

John Downing: “She [Marion Coy] describes the HQ structure, it’s interesting that Fine Gael’s headquarters is a street away from Leinster House and Government Buildings, yet the criticisms, one thing in common in both reports, is that this campaign was too top-down, that it was dictated by a small group at the top of the party pyramid and Ms Coy recommends a overhaul of many of the elements of the party, including research and the communications office. And she talks about electoral strategy and planning for elections done in a more inclusive manner.”

Previously: ‘I Didn’t Enjoy The Election…But I’ve Got My Mojo Back’

25 thoughts on “Top Down ThinkIng”