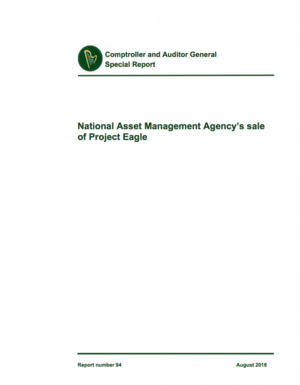 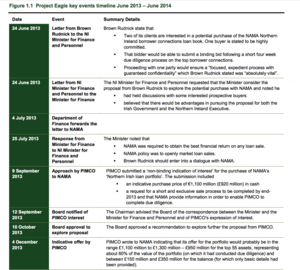 The Comptroller & Auditor General’s report into Nama’s Project Eagle sale and a timeline of the sale, as set out in the report

The Comptroller & Auditor General’s report into Nama’s sale of its Northern Ireland property portfolio, Project Eagle, to Cerberus has been published.

On average, NAMA incurred losses of around 1% on those sales. The corresponding loss rate on Project Eagle was 13%.

In a paper submitted to the Board for the December 2013 meeting (reproduced in Appendix C), the NAMA executive sought the Board’s approval for the sale of the loans.

The paper indicated that the total NAMA debt for the loans at end November 2013 was £1.98 billion – equivalent to 43% of the par debt.

Cash flow projections indicated that NAMA would realise net receipts totalling £1.68 billion over the period 2014 to 2020, if it worked out the loans through the sale of the underlying assets in line with its formal strategy. The paper recommended a minimum price of £1.3 billion be set for a loan sale.

…In June 2013, the NAMA Board endorsed the use of a standard discount rate of 5.5% to evaluate the viability of potential transactions or commercial decisions, including decisions whether to hold or sell an asset.

The examination team applied that standard rate of 5.5% to the projected cash flows in NAMA’s December 2013 paper, and estimated the loans had a NPV of £1.49 billion. This amount represents the probable value to NAMA, as at the end of 2013, of working out the Northern Ireland debtor loans.

As a result, the decision to sell the loans at a minimum price of £1.3 billion involved a significant probable loss of value to the State of up to £190 million in NPV terms.

…The paper presented [by the NAMA executive] to the [NAMA] Board projected the end-December 2013 carrying value of the loans at £1.48 billion. This was a forecast of the value of the loans that would be reported in NAMA’s 2013 annual financial statements.

However, the paper proposed a downward adjustment of £85 million in the carrying value to reflect additional expected impairment, resulting in an ‘adjusted carrying value’ of £1.39 billion. This examination found that the records supporting the December 2013 paper did not provide evidence justifying the adjustment.

Other evidence presented by NAMA during this examination supports a downward adjustment of, at most, around £8 million in cash terms. Consequently, the adjusted carrying value of £1.39 billion presented in the paper to the Board underestimated the value of the Project Eagle loans.

The NAMA paper for the Board recommended that the minimum price for the sale of the loans should be £1.3 billion, but did not state that this would represent the best achievable return, or what the recommended minimum price was based on.

…the Board has stated that its decision on setting a minimum price was based on the portfolio’s adjusted carrying value (i.e. £1.39 billion) and on the Board’s acceptance that a purchaser’s discount of at least 10% would apply if the loan sale were to proceed. The Board also stated that the minimum reserve price was the best price deemed achievable through a loan sale.

…The argument that a discount rate of 10% would have been appropriate in calculating NAMA’s workout value for the loans is not persuasive.

The minutes of the meeting on 12 December 2013 record that: “The Board agreed that the paper and analysis presented therein presented a compelling commercial case to sell the portfolio, and that in addition such a portfolio sale would release NAMA from what had been a disproportionate burden of effort in light of the relative size of the portfolio.”

During NIAC meetings and in annual statements of interests, one external NIAC member, Mr Frank Cushnahan, declared his involvement as an advisor, mainly on a non-fee basis, to six NAMA debtors and to a third party engaged in a joint venture with a seventh debtor.

The examination team estimated that the loans of the six debtors represented about half the value of the Northern Ireland loan book.

The NAMA Board should have formally considered whether Mr Cushnahan’s engagement in discussion of the strategy – including the PIMCO/Brown Rudnick approach – was consistent with his ongoing involvement as financial advisor to a significant proportion of NAMA’s Northern Ireland debtor connections.

…NAMA sought and relied on an assurance from Cerberus that no fee or payment was payable to anyone connected with NAMA “in connection with any aspect of our (Cerberus) participation in the Project Eagle sales process”.

NAMA only learned of Brown Rudnick’s engagement with Cerberus on 2 April 2014, and do not appear to have asked Cerberus when it engaged Brown Rudnick, or what was the precise nature of the services Brown Rudnick and Tughans were providing to Cerberus.

The allegations of Mr Cushnahan’s involvement in an arrangement to share fees with Brown Rudnick and Tughans (or the managing partner of Tughans) warranted more action by NAMA when the matter came to light, such as seeking advice from the unit within the National Treasury Management Agency that was responsible for providing compliance support to NAMA, or writing to Mr Cushnahan to seek confirmation or an explanation.

Lazard was not briefed on the disclosures, and was not asked for its assessment of the potential implications for the integrity of the sales process. NAMA appears to have taken a narrow approach, focusing on what were its legal obligations, rather than on what were the options for action that should be considered.

Look at how long it took to prepare Comptroller’s report. Govt would have known facts & draft conclusions since Jan pic.twitter.com/cNR49n4yld

@gavreilly Here’s the relevant para. NAMA had until 2020 to work out the loans & make £368m more than it sold for. pic.twitter.com/4UZr9x9xpv

More as we read it.