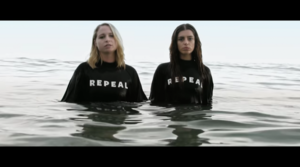 The film is the culmination of the time and effort of almost 100 people who kindly donated resources and skills for free.

61 thoughts on “For Your Consideration: We Face This Land”