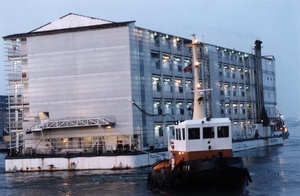 A ‘flotel’ in Norway

Further to reports this morning, that Labour Dublin City Councillor Mary Freehill has put forward a motion that the council look at the possibility of using “floating hotels” in Dublin to increase the availability of accommodation.

Readers may recall the same concept being mooted in response to the increase in asylum seekers arriving in Ireland in early 2000 – around the time the system of direct provision was established.

The then Waterford Minister of State for Public Works, Martin Cullen, even travelled to Norway  to inspect so-called flotels while the Department of Justice looked at leasing up to six flotels in the ports in Dublin, Waterford, Galway, Limerick and Cork.

At the time the idea was proposed, the then taoiseach Bertie Ahern, on a trip to Australia, had just visited the Migrant Resource Centre at Campsie, outside Sydney and had caused controversy over comments he had made.

At that point, it was reported that some 3,600 to 4,000 “illegal immigrants” were being held in six detention facilities throughout Australia.

The Taoiseach, Mr Ahern, was at the centre of a political row last night over comments he made in Sydney suggesting Ireland might learn from Australia’s stringent immigration rules, where illegal immigrants are held in detention centres.

There is mandatory detention for “unlawful non-citizens” under the Migration Act in Australia. Any such person found must go to a detention facility until granted a visa or removed from the country.

…Speaking after his visit to the resource and language centre, Mr Ahern said he was anxious to see how the immigration policy was working there since it was said that “this is the best integrated system in the world“.

Tension has arisen within the Government over the controversial proposal to accommodate asylum-seekers in “flotels” in ports around the State.

The plan is due to come before the Cabinet tomorrow following intensive discussions in recent days involving the Taoiseach, ministers and officials. However, clear differences have emerged, with the Minister for Justice, Mr O’Donoghue, facing stiff opposition from the Minister of State with responsibility for the Office of Public Works, Mr Martin Cullen.

It is understood that Mr Cullen believes Irish ports – particularly his home port of Waterford – are not suitable for the berthing of “flotels”. He is seeking a meeting with Mr O’Donoghue.

The differences of opinion on “flotels” emerged after the Taoiseach intervened at the weekend to ensure that the radical set of measures to deal with asylum-seekers coming into the State would be ready to go before the Cabinet tomorrow.

The Department of Justice said on Friday that the asylum package, which includes proposals for dispersal of asylum-seekers as well as the “flotel” plan, would not go to Cabinet until Tuesday of next week. However, The Irish Times has learned that, on his return to Dublin from Lisbon on Friday evening, Mr Ahern let it be known that he wanted the plan ready for Cabinet tomorrow. Officials in the Department of Justice and the OPW have been working over the weekend preparing a Cabinet memorandum.

However, the idea never took off.

Meanwhile, up to 1,000 new bed spaces are due to become available for asylum-seekers in hostels, hotels and guest houses around the State next month. The OPW has been inspecting various accommodation sites on behalf of the Directorate for Asylum-Seeker Services set up by the Department of Justice, Equality and Law Reform.

The new accommodation stock includes the Parnell West Hotel in Parnell Square, Dublin, which was bought by the Department of Justice for €2.5 million. It is understood that the Department is completing deals to lease about 500 beds in two hotels in Co Cork, one in Rosslare, Co Wexford, and hostels in Tralee and in Co Carlow. The minimum lease on such properties is 12 months, but this is open to negotiation.

As part of the Government’s “direct provision” programme, asylum-seekers living in this type of accommodation will be on full board, which includes three daily meals. They will receive €15 per week per adult to purchase “extra comforts”.

The Nauru files: cache of 2,000 leaked reports reveal scale of abuse of children in Australian offshore detention (The Guardian)

4 thoughts on “The Berth Of Direct Provision”