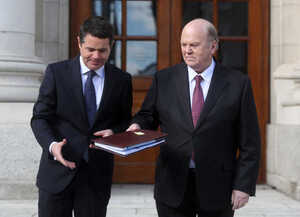 The procedural aspects of the financial management of the country are not to be found in any single event at any given time.

It would save a great deal of air space, bandwidth and newsprint if the budget unveiled in Leinster House this week by Michael Noonan and Paschal Donohue, would be the last Budget presented in such a way.

This isn’t so much because of its content. This year’s combination of cynical box ticking carried less obvious offence than usual. What we should put to bed is the arch and archaic protocols that seek to portray the budget as something mystical that is happening.

I got to respond directly to five budgets from the floor of Dáil Éireann. Two of these were presented by Charlie McCreevy, the other three by Brian Cowen. For those years I was the RTÉ 2 alternative to the Six One News. Apologies for that.

Not that it mattered in those Celtic Tiger Version 2 days. Those budgets were all about spending for the tomorrow that was never meant to exist.

During that time some evolution occurred, most reflecting the nature of society that was being created. The typewritten speech given at the start of the debate was replaced by a printed book. This was added to subsequently with a CD-ROM. The ‘truth’ truly did exist in many forms.

This even extended to the prose attaching to the documents themselves. The decades long use of Sean and Mary and their circumstances, to highlight the effects of taxation changes, saw them being unceremoniously replaced by Ken and Nicola, the aspiring couple of the new thrusting Ireland.

The pretence that the contents of a budget could not be revealed before the Minister stood up to speak, was stated to be a measure to prevent spooking the financial markets.

I suspected it was more a device to prevent accountability by restricting opposition spokespersons to speed reading detailed documents, whilst thinking of how to construct something coherent to say.

It isn’t as if there is even a vote on the Budget. At the end of the set pieces there are sometimes some financial measures that become effective at midnight of that day, but there is not single vote that asks the question ‘So this Budget – a good thing or not?’.

There shouldn’t be any mystery here.

The procedural aspects of the financial management of the country are not to be found in any single event at any given time. It is an everyday, year long responsibility.

We have a Book of Estimates. We have a Finance Bill. We have a Social Welfare Bill. That’s where and when the details can be analysed and decisions get made.

The real cut we should be making is to The Budget itself.

15 thoughts on “The Last Budget”