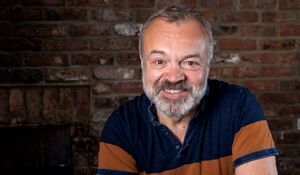 Michael Bublé brought the house down when he visited The Late Late Show studio recently. On Friday night, viewers will get to see the Canadian troubadour in action as he performs a recent hit and one of his classics; and he chats to Ryan Tubridy about life on the road now that he’s a father of two.

Chatshow host and comedian-turned-crime novelist Graham Norton will discuss life as one of the UK’s most beloved TV presenters….

Four-time All-Ireland winning Kerry footballer Kieran Donaghy will discuss his stunning career on the pitch and how he achieved those feats while dealing with a turbulent home life.

We celebrate the legendary Joe Dolan with a very special performance by country star of the moment, Nathan Carter, as he duets – via the magic of archive footage – with the late Mullingar crooner on his classic hit ‘Make Me an Island’.

32 thoughts on “Staying In Friday?”