Women in Iceland come together to fight for equality, shouting OUT #kvennafrí #womensrights pic.twitter.com/vTPFwfSoVk

Iceland women left work on Monday at 2.38pm, 14 per cent early to refeect the country’s  gender pay gap.  If we did this in Ireland (please!) what time would we have to leave work?

Just getting in touch as I see you have covered the story broken by the NY Times and The Independent about the gender pay gap in Iceland and yesterday’s walk-out by female employees.

I noticed that you wanted to know what time Irish women would walk out of work and as we provided the stats for the original stories in both the NYT and Independent, I thought you might like to include them too, to give your readers a source and provide them with more information…

Our original research can be found, here 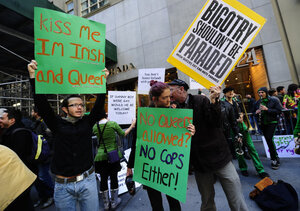 The Pride of Fifth Avenue

51 thoughts on “Ask A Broadsheet Reader”