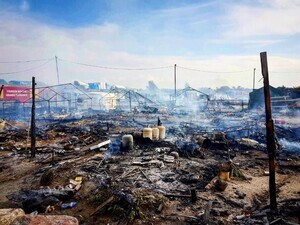 At the makeshift refugee camp in Calais, France

Further to reports of several hundred unaccompanied child refugees being left unregistered with nowhere to go in Calais, France, following its demolishment…

We know that unaccompanied minors have been exposed to serious abuse. They have no schools to attend and many are being exploited by ruthless child traffickers. We know from media reports that children as young as eight have been found unaccompanied in the Calais Camp.

Tusla (the Child and Family Agency) has considerable experience meeting the needs of unaccompanied minors or separated children. Ireland is well-placed to play a central role in supporting the relocation of these children. We are calling on the Government to urgently act to protect these children.

Information now reaching us is that any people (children or otherwise) face arrest after 2pm today if they don’t have a wristband. #calais pic.twitter.com/7IWY4xaveI

Head of CRS #calais just informed us he’s now finished for the day & cannot personally guarantee safety or protection for anyone anymore. pic.twitter.com/bQBagxXqCh

32 thoughts on “Meanwhile, In Calais”