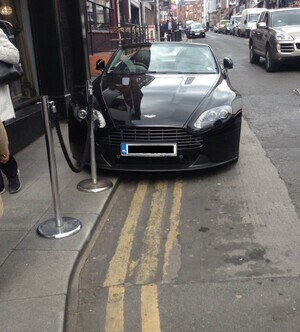 Inequality is growing again and the income of the Irish 1 percent is growing faster than anywhere else in the EU-15.

The 1 percent serves as an excellent symbol of actually existing capitalism. Examining the inequalities between households gives an insight into the level of solidarity within a country.

Wealth and power is manifested in other systemic ways – namely, the level of financialisation and bargaining power between capital and labour.

Still, a system that produces a 1 percent will be reinforced by that same 1 percent. So let’s take a look at how the 1 percent is doing these days.

A standard measurement is by ratio. 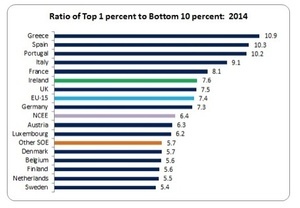 Here we see the ratio of the income of the top 1 percent (see below for a statistical description) to the to the top cut-off point of the first decile.

Though Ireland is not the worst – that is reserved for the poorer Mediterranean countries and France (this might help explain the rise of the National Front) – we’re still in the top half of the table.

We’re slightly ahead of the mean-average of the EU-15, but much higher than our peer groups: Northern and Central European economies (NCEE excluding the Mediterranean countries) and other small open economies (Other SOE). 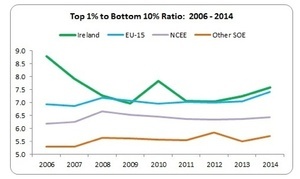 Ireland had very high levels of inequality towards the end of the boom period. The 1 percent took a hit with the crash given their greater reliance on property and speculative activity and this resulted in falling inequality: not because low income groups saw their income rise. It was just that their income fell slower than the 1 percent.

However, we will see below that not all higher income groups suffered.

But let’s first look at another measurement, the ratio between the 1 percent and the 5th decile – or that proverbial squeezed middle: 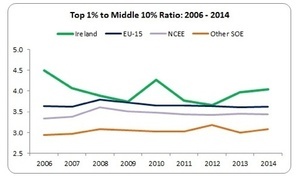 We see a similar pattern as with the ratio to the bottom 10 percent – except that since 2012, the gap with the top 1 percent has widened faster. And we see that in this measurement, Ireland has a high level of inequality. In fact, the gap between the top 1 percent and the middle 5th decile in Ireland is higher than any EU-15 country bar France.

It’s been quite a roller-coaster for the ol’ 1 percent in Ireland. In 2006, they had the highest level of income in the EU-15 bar Luxembourg. But by 2012, they had experienced a fall of 22 percent.

However, though they haven’t climbed back to their dizzying pre-crash levels, in the last two years their income has grown faster than any other EU-15 country with a growth rate of 13 percent compared to an EU-15 average of 3 percent. 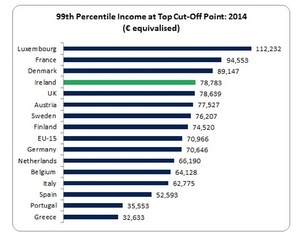 Even after the big recession hit, the Irish 1 percent still rank high in the EU-15 tables.
But not everyone in the high-income category are the same.

Unfortunately, we don’t have a compositional breakdown of the top 1 percent so we will have to make do with the CSO’s data which provides the top 10 percent. 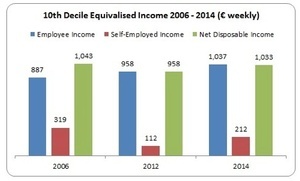 However, employee income continued to increase (and remember, employees in this top 10 percent would include CEOs, senior executives and managers, higher professionals, etc.)

The hit was to those relying on self-employed income which fell by 65 percent. We can assume that a large proportion of this was property-related income. Reduced social transfers and higher tax would have also reduced overall net income.

However, since 2012 net income is rising. Employee income continues to rise and the fall in self-employed income has been reversed; indeed, it doubled in the two years up to 2014. Net income for the top income earners rose by 7.9 percent; for everyone else it rose by less than 4 percent. The gap is widening.

Of course, we can’t automatically assume that the 1 percent had the same rise in income as the overall top 10 percent. It might be higher, lower or the same. But I’m pretty confident – and I’ll give good odds.

Prior to the crash Ireland was highly unequal with the top 1 percent doing better than almost any other 1 percent in Europe. In the recession they took a hit but if the CSO data can be used as a proxy, then this was due mostly to the loss in self-employed income.

This decline has been reversed, inequality is growing again and the income of the Irish 1 percent is growing faster than anywhere else in the EU-15.

Yes, the 1 percent are doing alright.

NOTE: the tables present household income in ‘equivalised’ terms. This accounts for the size of the household (adults, children). In the Eurostat tables, the income level is based on the top cut-off point. For instance, for the bottom 10 percent, the top cut-off point is that income point in which people rise to the next decile. For the top 1 percent, this is the income at which they enter that top decile.