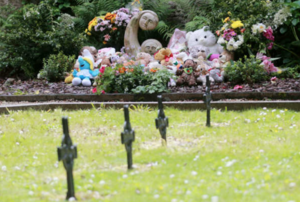 Children’s toys and flowers at the ‘Little Angels’ memorial plot in the grounds of Bessborough House in Blackrock, Cork in 2014

You may recall a post from 2014 which detailed a timeline of the known medical trials conducted on children in Mother and Baby Homes in Ireland, the response of successive health ministers and the contemporaneous expansion in Ireland of the medical companies involved in those trials.

The files of vaccine trial victims in Bessborough Mother and Baby Home were altered in 2002 — just weeks after the Commission to Inquire into Child Abuse sought discovery of records from the order running the home.

Material obtained by the Irish Examiner under Freedom of Information shows that changes were made to the records of mothers and children used in the 1960/61 4-in-1 vaccine trials.

The Commission to Inquire into Child Abuse (CICA) had sought discovery of the records from the Sisters of the Sacred Heart of Jesus and Mary on July 22, 2002. An affidavit was sworn on October 3, 2002, and on a number of later dates in 2002 and 2003.