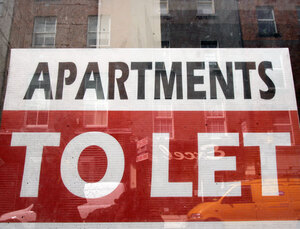 From top: Apartments to let in Dublin; Michael Taft

The Irish rental sector is a minefield.

But expanding subsidies in a sector with a supply crisis doesn’t help us out of the field – it just plants more mines.

Fresh from making a mess of home-ownership policy – in particular, the mortgage subsidy scheme which will increase house prices and end up in the pockets of developers – the Government seems intent on doing the same thing in the private rental sector.

As even the dogs in the street know, we have a bit of a rent crisis. The Savills report suggested that rents could rise by over 20 percent over the next two years.

And if you thought that couldn’t possibly happen, Daft.ie showed that rents have risen by nearly 12 percent in the last year – the highest annual rise since they started collecting this data in 2002.

The Government intends to publish a policy document on rents in the next few weeks but already some details are starting to leak out.

First, the Government is not expected to bring in rent regulation which could tie annual rent increases to some inflation benchmark. It is not known whether they intend to temporarily roll-over the current freeze on rent increases for sitting tenants.

But I can’t say that any of this is too surprising. When you have been raised all your life on the unfettered operation of markets, it’s hard to convert to fettering, even in a crisis.

But the real chestnut is the suggestion to expand rent subsidies.

‘A new system of payments to middle-income families to subsidise the cost of high rents is being considered by the Government. The payments would be aimed at households with a combined income of up to €55,000 as a temporary measure to prevent more families entering social housing programmes. The aim of the proposed payment is to help those whose income places them above the threshold to avail of Housing Assistance Payment (HAP), in which councils make payments to landlords.’

Here’s a pop quiz: if there is a high demand for a good or service that is in short supply, what happens when you give the ‘purchasers’ more money? You’d be right to say that this will only drive up prices even further.

With rental inflation running in double-digits, this is a proposal that can only accelerate this trend and end up being a significant drain on the Exchequer.

To call it ‘temporary’ is only to create a potential income trap.

Let’s say that a household is given €2,000 a year in rental subsidy. In time rents hit an equilibrium (elevated because of the subsidy). Is it being suggested that the subsidy would be withdrawn? What would that do to living standards?

Readers would be right to point out that we already have a rent subsidy programme – Rent Supplement and its eventual successor, the Housing Assistance Payment which is being rolled out.

Wouldn’t increasing these payments, as many housing campaigners have argued, drive up rents? Yes, but these payments are limited to low income groups and currently rent can’t be increased for sitting tenants until 2019.

Campaigners who have made this demand are aware of this danger and have also called for increased supply. But there is no doubting that even socially essential measures can have, hopefully minor, impacts in a sector that is so imbalanced.

But the mantra ‘increase supply’ simplistically assumes a linear relationship between supply and demand in a market where credit, availability of land, planning permission and hoarding also feed into prices.

If the Savills model is correct, supply may well increase but this won’t take the heat out of the rental sector unless it (a) increases supply by substantially more than rising demand and (b) can lower the vacancy rate. Otherwise, we have a situation whereby units come on stream, rents rise, tenants pay higher rents in a circle without seeming end (sound familiar).

And if you want to increase supply you have to maintain a high investment yield or even increase it which only drives up rents even further.

In fact, when you hear ‘encourage supply’ watch out – this is about maintaining or even increasing high yields, usually through tax cuts for the providers (sound familiar).

And if the market signals are not working on all cylinders supply could overshoot demand and you end up with losses, bankruptcies and a slump (sound familiar).

In other words, it is a minefield. But expanding subsidies in a sector with a supply crisis doesn’t help us out of the field – it just plants more mines.

There is another starting point: create the institutions and agencies – public, non-profit, even commercial (particularly, long-term investors such as pension funds) – that can produce and rent out units at cost (for commercial investors, a guaranteed yield) and then link rent increases to inflation, interest rates, etc.

Then you can introduce widespread rent subsidies without fear of it being consumed in higher prices. That’s a better staring point.

Note: You can sign a petition to Minister Simon Coveney calling for rent regulation here at the Uplift/Secure Rents campaign site.

21 thoughts on “They Really Can’t Be Serious”