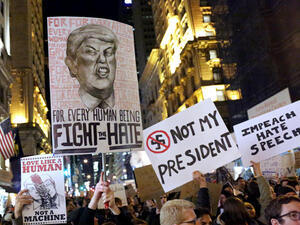 Liberal smugness has been quite content to allow previously inactive portions of the electorate to wallow in their indifference.

Political correctness is in the firing line. Its existence threatened by an unlikely coalition of preciousness and prejudice. Those of the lofty left have weakened the tolerance of needing to prevent the use of any language of hate, by zeroing in on what often have been the most petty examples of such speech.

The rabid right exaggerates that the right of free speech itself has been compromised by PC practice and doctrine, when what they really are being denied is the right to express prejudice.

PC is a convenient crutch for either the left or right. By focussing on it we are ignoring the far more serious trends that have created the shifting political sands of today.

The current shift, which we need to recognise is quite a narrow shift, is based on seeds sowed forty years ago by followers of Ronald Reagan in the US, and Margaret Thatcher in Britain.

This nexus promoted the creed that individualism rather than the common good should inform policy making. For liberals the State exists to meet unmet social needs, needs that become exacerbated in a totally unregulated society.

The real failure of liberalism has been the smug and patronising assumption, that enough of the electorate would always support the common good above individualism.

This has been only partially true.

The political advance of individualism has been led by those who, on the whole, have been doing very well, thank you very much. Their motivation has been to protect their entitlement from uppity others intent on (as they perceive) spoiling their way of life.

These needed to add to their columns by attracting enough of the deactivated votes of the discontented/disconnected to make a difference. Again they have been able to do so by liberal smugness, that has been quite content to allow previously inactive portions of the electorate to wallow in their indifference.

This smugness has left unchallenged the alt. right narrative that has played so strongly to the ingrained prejudices of the individualists and their convenient compatriots from the neglected reaches of society.

This is the template that has been used just as much for Trump as it had been for Brexit, and may yet do in a number of European theatres in 2017.

For liberals to win back the narrative there has to be less head in the air, less Mr. Nice Guy. The extremes of politics, both right and left, have been well prepared to lie to secure their narratives.

Liberals seem to be more prepared to deceive themselves.