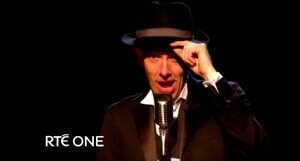 With just two weeks to go to The Late Late Toy Show, the teaser debuts on RTÉ One tonight but here’s a sneak peek (above) before it goes live! This year’s teaser sees The Late Late Toy Show host Ryan Tubridy unleash his inner Sinatra as he hopes to impress a panel of mini-judges with a special lip-sync version of the modern festive classic “All I Want for Christmas Is You”.

What Time Is it?

8 thoughts on “Mad About The Toy”