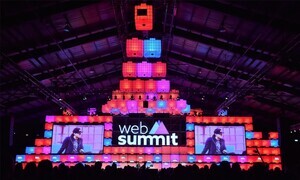 Never mind. How was Web Summit?

Web Summit is where humanity rushes towards its extinction….

This would explain a few things. For instance, what do any of the companies exhibiting at Web Summit actually do?

Much of the conference space is given over to these start-up exhibitors; each of them gets a meter of wall and a plug socket for their laptop, along with a big sign in which they announce their ambitions in terms that make absolutely no sense whatsoever.

Of course, the tech industry has its own specialized discourse, so while one company announces that it “brings the next generation of B2C, B2B, B2E platforms to a high qualified partners network supported by a great business model,” you can make the vague assumption that all this gibberish might actually mean something to someone somewhere.

Similarly, with TrackingDoc, tagline “selling is a game,” which lets you “discover how people engage with your sales documents.” It’s a strange kind of language, all modifiers bleached lifeless by cliché, employing the most grandiose terms (‘discover,’ ‘transformational,’ ‘revolution’) to describe what tends to be a new way of doing paperwork, spinning precariously on the edge of meaninglessness, but it’s still language.

But what about the firm calling itself (for unknown and possibly unpleasant reasons) Kwanko, announcing simply that “data is the new performance?”

Or Lapa, which claims without any other information to be “transforming the way people search and protect all the things they can’t live without?” Or CrowdT, a “crowdfunding platform using apparel to raise funds?”

This isn’t meaning, in any of its usual senses, something that exists to be understood, but the zombie signifier, words building and feeding on each other to form a system terrifyingly self-sustaining and utterly opaque.

32 thoughts on “Is Data The New Performance?”