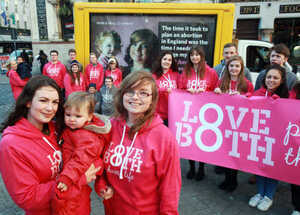 Pro-life supporters, iocluding above from left: Emma Maloney, Rossa and Mary Kenny, launch the ‘Love Both’ project highlighting “all that’s positive about the Eighth Amendment“. The Government has offered €30,000 in compensation to Amanda Mellet, the woman who successfully made a complaint to the United Nations about Ireland’s abortion laws.

The Rotunda Hospital, where Ms Mellet received her scan, acted in accordance with existing laws by informing her of her options, namely, to carry to term or to “travel”. 24 thoughts on “Bringing The Love”