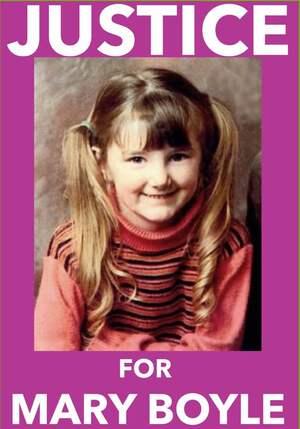 A Christmas vigil for Mary Boyle will be held at the gate of the Gallagher farm in Cashelard, Ballyshannon, Co Donegal – where she was last seen.

Mary Boyle was six years old when she went missing on a visit to Cashelard on March 18, 1977.

Some months ago, Margo [O’Donnell] and I travelled to Cashelard to try to speak to Mary Boyle’s uncle Gerry Gallagher, a member of Fianna Fáil and the last person known to have seen the little girl alive.

When she disappeared in March 1977, he claimed that Mary had followed him across remote fields but vanished somewhere along the way.

Margo, Ann Doherty [Mary’s sister] and I believe that Gerry Gallagher holds important information about what happened to his niece.

While Margo and I were in the isolated townland of Cashelard, we came upon a jeep being driven by his wife Eva Gallagher.

Eva lived on the farm where Mary was murdered and was there on the day she went missing. We saw the jeep pull into a local shop. Margo decided to approach Eva and ask her if she was willing to talk about the case and what she thought had happened to her husband’s niece.

However, Eva refused to speak to her and left the car park at high speed, before returning briefly to collect a gentleman she had accidentally left behind.

Margo and I later went to the home of Gerry Gallagher but were refused entry by him and Eva who spoke to us from behind the door and told us to leave.

When I was making my documentary about the case, I rang Gerry Gallagher and asked him if, as the last person known to have seen Mary Boyle, he would be willing to take part in it.

I then asked him if I could film on his land where she went missing and he agreed. One day, when I was filming there, we met Gerry Gallagher. The retired detective Aidan Murray, who appears in my documentary, was sitting next to me in my car when Gallagher approached. Garda Murray asked if we could film on the land and he said we could.

The following day, I went back to the farm alone with the camera crew and Ann Doherty. The cameramen went on ahead to set up their equipment but, as Ann and I approached, we could see them walking back towards us.

They said that Gerry Gallagher had approached them and told them to get the f*** off his land and to tell me to do the same. We left immediately.

Shortly afterwards, we went to the house of a neighbour we know to download our footage. Eva Gallagher arrived at high speed and in a temper. She attempted to corral us into the neighbour’s courtyard with her car.

We were able to leave with just inches to spare.

These are just some of the many disturbing incidents that have happened to me and Margo O’Donnell involving members of Mary Boyle’s family in recent months, as we try to expose the truth about her murder which continues to be covered up to this day.