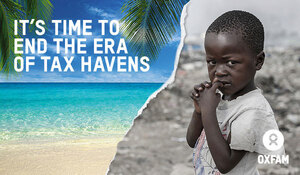 Further to Oxfam’s report on tax havens, which cited Ireland as the ‘6th worst corporate tax haven’ in the world.

In light of the report from Oxfam, I thought it might be worthwhile drawing your attention to a piece I wrote for this month’s Village magazine [link below].

As Oxfam International continues to call for multinationals to pay more tax, it is engaged, interestingly, in practices in the UK which one commentator has described as looking “remarkably like tax avoidance“.

Furthermore, as a member of the Irish Charity Shops Association, Oxfam Ireland has previously lobbied for further reductions in its own tax here.

In response, Oxfam Ireland have since claimed that the “positives of reducing a charity’s tax/rates liabilities [sic] are obvious”.

Some might argue that Oxfam would say that, but perhaps you’ll let your readers decide for themselves….