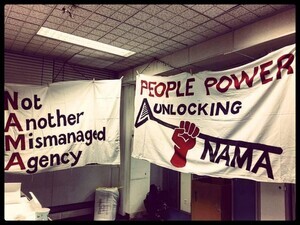 There is still time to use NAMA to do what it should have been used to do from the outset- to help heal the scars of the crash and austerity and the injustices of the bailouts.

Today at 12 noon the HomeSweetHome campaign will march from Apollo House to hand in a letter [at link below] and petition to the Minister for Finance, Michael Noonan, calling on him to direct NAMA to use its property assets to address the homelessness and housing crisis.

The government and NAMA have been trying to hide from the public the significant role that NAMA could be playing in addressing the housing crisis. But the Apollo action means there is no more hiding for NAMA and the government.

This article provides a detailed overview and analysis of why and how NAMA should be used to address the housing crisis. A number of these points are included in the HomeSweetHome letter to the Minister.

While myself and other academics and housing activists have been making the case about NAMA for a number of years it has taken the innovative and inspiring Apollo House action to bring widespread public attention to this.

And it has become even more urgent as the homelessness crisis continues to worsen. The latest monthly figures show that there are now 1,205 families, with 2,549 children, living in emergency accommodation in Ireland.

These figures how that the occupation of the vacant NAMA building, Apollo House, and its transformation into safe and secure accommodation for homeless people is the correct, and socially just, thing to do in order to get public and political attention focused on our housing and homelessness crisis which is a national humanitarian emergency.

The figures show that the the dismissive criticisms made recently by various politicians and Dublin City Council officials about Apollo House are wrong.

Those comments are part of an-going attempt to undermine the massive groundswell of public support for the HomeSweetHome action.

This truth is the core injustice of NAMA itself– it is a truth that government and NAMA officials have attempted to hide from the Irish people.

The NAMA injustice is that NAMA is a state (i.e. belongs to me and you) agency that has the buildings, land and finance that is being used to enrich wealthy property investors rather than being used to end a homelessness crisis that sees hundreds forced to sleep on our streets and thousands of homeless families and children traumatised living in emergency accommodation.

The central problem with NAMA is that senior NAMA officials (operating under direction from the Minister of Finance) have prioritised NAMA’s purpose outlined in Section 10 of the NAMA Act 2009 which is to “obtain the best achieveable financial return for the state”.

The problem with this is that while it might appear that NAMA is maximising the commercial return to the state and taxpayer, it is in fact playing a major role in worsening the housing crisis and thus adding to the economic and social costs of dealing with the housing crisis.

NAMA has sold off loans, land and property to foreign vulture funds who have evicted tenants and raised rents to unaffordable levels.

Most disgracefully NAMA has sold development land (sites) to investors that had the potential for up to 20,000 housing units. However, just 1,100 (5%) of these have been built or are under construction. The investors have hoarded the land, waiting for (and contributing to) housing prices to rise.

NAMA’s current approach is thus worsening the housing crisis and resulting in a significant cost to the state through the necessity for increased spending on homeless accommodation and private rental schemes such as RAS, HAP etc.

It also means that there is no guarantee that the sale of its land and assets will be used in the provision of affordable housing (or other uses). In all likelihood in the current market – financiers are purchasing them to hoard and accrue value before resale in future years rather than redevelopment.

As I wrote in an opinion piece published in the Irish Times on NAMA in 2014:

“By pushing for maximum commercial returns, Nama is working against the interests of those looking for an affordable and secure home. It is continuing the speculative-asset approach to housing that fuelled the crisis. This promotes residential property as a commodity rather than a social good.

Nama is facilitating a massive transfer of wealth created by the Irish people to foreign and domestic capitalist investors.

But Section 2 of the NAMA Act 2009 states that NAMA’s mandate is “to contribute to the social and economic development of the State”.

So why is this not NAMA’s priority?

Furthermore, under the provisions of section 14 of the NAMA Act the Minister for Finance has the power to issue a direction to NAMA.

The Minister should then direct NAMA to sell its property related assets in Ireland (loans relating to land and residential property and holdings of property and land) to local authorities, housing co-operatives, community land and housing trusts, and housing associations rather than vulture funds and REITs.

NAMA should also use the 6000 residential units currently in its possession to house homeless and people off the housing waiting lists as these units become vacant.

However, the only legal obligation on NAMA is to provide 10% of these units for social housing.

Furthermore, while NAMA states that these units will be ‘starter homes’, at market rates they will be out of reach for many first-time buyers. In 2017 3,500 of these are expected to be built (2,500 are already under construction in the Dublin area). A third of these units- 1,100 of these units – should be used to house all families who are currently living in emergency accommodation, such as hotels and B and B, in Dublin.

It should be noted that NAMA has provided around 2000 social housing units to date. In fact, local authorities have been offered 6,635 units by NAMA e.g. over 800 houses were offered to Dublin City Council but only were 400 taken up, largely because of insufficient funding being made available to local authorities by government and issues relating to over concentration of social housing in certain areas.

The Minister for Environment, should immediately direct local authorities to take up all NAMA offers of social housing and that these will be funded and sanctioned by his Department.

Furthermore, NAMA could build tens of thousands of additional homes on its own and local authority land through the use of its cash reserves and delaying the repayment of its remaining debt. NAMA has already paid off 81 per cent of its debt of €31 billion (€25 billion), so that only €5 billion remains to be repaid.

Currently the Minister Finance and NAMA are planning to pay down the remainder by 2020 and Michael Noonan, has repeatedly defended NAMA’s ‘maximising of the commercial return’ from the sale of its land and buildings in order to pay back this debt as soon as possible.

But that timeframe is arbitrarily set by NAMA and the Minister for Finance. NAMA can fulfil its commercial mandate and pay down the debt – just over a longer time frame – through the development of affordable housing schemes using its cash reserves and ability to raise low interest finance to fund development.

This can be staged over a longer time frame than that currently fixed. For example, NAMA could fund through its cash reserves and lending to local authorities and housing associations the building of upwards of 50,000 affordable (affordable homes for broad range of income groups through social rental, cost rental and affordable purchase) housing units in coming years using NAMA and other state land.

This would save the State a substantial proportion of the €100 million annual expenditure in emergency accommodation and hundreds of millions more euro on various social housing schemes in the private rental sector.

So if NAMA, for example, provided 20,000 social and affordable units, it could save the State at least €1 billion over five years, and at least €2 billion over ten years (this would increase if 50,000 units were built), which equates to the return NAMA is supposed to provide to the taxpayer anyway.

Furthermore, this approach would provide a longer term rental income stream and housing assets to the State, and would address the humanitarian disaster of homelessness and the social and economic costs of the wider housing crisis. NAMA has already developed a model for doing this using its NARPS special purpose vehicle, and is building some social and affordable housing across the country, although at very low numbers.

But there is still time to use NAMA to do what it should have been used to do from the outset- to help heal the scars of the crash and austerity and the injustices of the bailouts.

It could do this by contributing to the social recovery through social and affordable housing provision for the Irish people rather than fuelling the economic recovery of the already wealthy global and Irish investors.

“When our financial system was in peril there was no obstacle too large for the State to overcome. Now we face an equivalent crisis in housing needs. It is legitimate to ask why the same radical approach is not applied to the housing crisis. It appears the Government is unwilling to stand up to the financial and property investors”.

The Receivers appointed by the NAMA to Apollo House obtained an injunction from the High Court directing the occupiers to vacate the premises by noon January 11 2017. The effect of this is that at least 40 people, currently housed at Apollo House, will be rendered homeless and forced to live on the streets.

In the coming days a lot of public support is required to convert this brave citizen’s act into an unstoppable movement for a right to an affordable and secure home for all in Ireland.

You can start by signing the HomeSweetHome Open Letter to Michael Noonan, demanding he use NAMA’s resources to help end the homelessness crisis here:

64 thoughts on “Apollo, Nama And You”