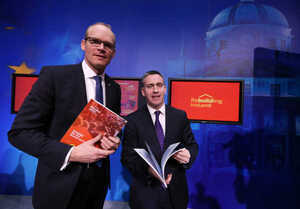 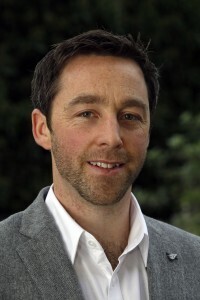 The Rebuilding Ireland Plan has allocated insufficient funding, is manipulating the use of the term ‘social housing’ and misleading people with its promises

The government has been responding to the Apollo House action by stating that dealing with the housing crisis is its “number one priority” and that their housing plan, Rebuilding Ireland, will address the crisis through the investment of €5bn in “a truly ambitious social housing programme of 47,000 units to 2021”.

Minister Coveney claims that “There’s a real acceleration happening here in terms of delivery” and has stated that there will be more than “21,000 social housing solutions provided in 2017”. With Budget 2017 providing “for a very significant increase in housing funding (of €1.3 billion).

But the Minister’s figures and the Rebuilding Ireland Housing Action plan just don’t add up. 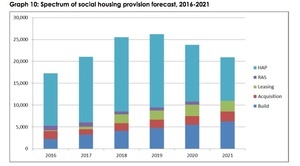 The graph above is the forecast provision of social housing in the Rebuilding Ireland Plan from 2016-2021. But in this you see that the new construction of social housing (represented by dark blue shade at the bottom) is only a very small proportion of the overall 100,000 ‘social housing’ units to be provided over the next 5 years.

The majority of ‘social housing’ is in fact not new build social housing at all but are various housing support schemes provided through the private rented sector such as the Housing Assistance Payment and the Rental Accommodation Scheme.

These social housing ‘solutions’ (as the Minister’s refers to, note change of language from ‘new build housing units’ to ‘solutions’) are temporary, do not provide tenants with security of tenure and most importantly do not increase the much needed supply of real permanent social housing homes.

The schemes such as RAS and HAP have not met their delivery targets due to lack of availability of private rental housing (thus the governments social housing strategy also exacerbates the rental crisis – as it is taking supply from a sector that requires greater supply – a third of all tenancies are state funded social housing schemes.These should not be classified as social housing as it is not providing a secure form of tenancy).

Of course the HAP schemes suit government because they can reduce the housing waiting lists and make it appear as if the housing crisis is being dealt with – also while subsidising private landlords and avoiding allocating the necessary increase in funding to government/local authority state provision of affordable housing.

The Rebuilding Ireland Quarterly Review published in November gave the first official figures for what is represented in the graph above and breaks down the 47,000 ‘new social housing’ units figure.

It is expected that 26,000 units will be built (construction, voids, Part V) exclusively for social housing

And 10,000 units will be leased by LAs and AHBs – this will be a mix of units from the existing housing stock and newly-built units

Now the key figure here is the new build one because this provides additional housing supply. This is particularly important in Dublin, the commuter counties and other large cities (Galway, Cork) which need new units built and do not have the same vacancy level as other parts of the country. So the actual figure for ‘new build’ social housing units is 26,000 units (just over half the headline 47,000 figure).

Now as is mentioned this also includes bringing local authority voids back into use and new housing built under Part V (the 10% social housing provided in large private housing developments). But Part V delivered just 65 units in 2015 (but 286 were in progress).

Given that Part V delivered 3,246 units in 2007 (4.5% of total 71,000 private units delivered), and that was when Part V was 20% of all developments – which has since been reduced to 10% (but developers could pay cash to the local authority in lieu of the units and this is no longer available), then using the same percentage, then on the basis of 25,000 private units per annum, Part V is likely to deliver no more than 1,250 units per annum in the coming years.

It was also estimated that 800 local authority voids would be brought back into use in 2017 so taking that away it leaves us with 23,950 new real social housing units planned to be built between now and 2021: which is 3,991 units per annum.

How can that, in any way, be deemed an acceptable time frame of delivery to address the crisis? Particularly given that housing need is increasing significantly.

So what about the increase in the allocation in social housing investment in Budget 2017? The total exchequer Housing allocation in 2017 will be €1.2 billion –up from €814million in 2016.

However this is the same trick – the main increase is on temporary social housing through the private rental sector. Current (mainly spent on private rental sector schemes and leasing from private sector) increases from €382m to €566m while capital expenditure (includes new building and purchase of permanent social housing) only increased by an additional €150 million from €432m in 2016 to €655m in 2017.

But the ‘housing’ capital budget appears also includes €50m for an ‘infrastructure’ fund for local authorities to enable the development of private sites for housing, the payment for previous social housing already built by housing associations, the mortgage to rent scheme, urban regeneration, €70m for retrofitting existing social housing stock, €45 million for grants for private housing and funding for schemes such as the Pyrite Remediation Scheme. So while we don’t have an exact figure we can see that the actual budget allocation for new building (and purchase) of social housing is certainly under €400 million.

The plan itself acknowledges that securing the social housing output is “dependent on a number of critical factors” including, most importantly,

And this is where the plan ultimately fails. Its output of social housing is dependent on a very significant increase in supply in the private housing market which has already proven in its inability to do so.

What is required is an increase of the social housing capital allocation to €2bn per annum to local authorities and housing associations to ensure the building of at least 12,000 new permanent social housing units. This is alongside the changing of NAMA’s mandate to prioritise its social mandate over the maximising financial return and to ensure the 20,000 units it builds are affordable and public housing units – and to use its 3bn cash reserves to build an additional affordable and social 30,000 units.

It is only when we get close to building at least 20,000 new affordable and social housing units per annum that we can get close to addressing the national emergency of the housing crisis.

Ultimately the only guarantee of affordable supply of housing to a broad range of income groups (from the lowest income to middle income workers) is by the state through local authorities (with support from Housing associations). A social mix in developments can be achieved by the state building affordable housing available to different income groups.

This should be a mix of traditional public housing, cost rental housing, shared ownership, equity partnerships and cooperative housing. It is the time for a ‘New Deal’ in housing where we take this opportunity to ensure the provision of affordable and high quality homes as a right to all in this country.

It is great to see that Home Sweet Home’s Emergency Housing Plan includes these ideas as some of its core proposals.

Home Sweet Home outlines that there should be the provision of “a minimum of 10,000 new social/public housing units owned by Local Authorities and Approved Housing Bodies per year for the next decade in order to clear all social housing lists”.

The government should “suspend all sales by NAMA of land and assets and use its finances to deliver 10,000 new social and affordable housing units for families and low-income households”.

Most importantly Home Sweet Home outlines that this new social and affordable housing building programme can be financed through “ceasing all tax cuts until the current housing and homelessness crisis has been averted”. It states that it “is morally reprehensible that we have so far given more than €2.5 billion in tax cuts while homelessness has doubled and thousands of children are spending their childhoods growing up in hotel rooms”.

They also highlight correctly that “should borrowing be necessary, the National Treasury Management Agency (NTMA) has borrowed €500m at an interest rate of 0.81%. This low cost borrowing could provide up to 5,000 social housing units per year”. F

urthermore, they point out that in 2014 the Irish League of Credit Unions formally proposed making up to €5bn available for social and affordable housing schemes but “two years on and Government has yet to formally respond. This source of funding should be accessed as a matter of urgency”.

Rebuilding Ireland is a fundamentally flawed plan as it driven more by an ideological aversion to the state building affordable homes than evidence-based policy solutions based on meeting the housing needs and right to housing for people.

The Plan is based on the taxpayer incentivising and subsidising the private construction industry and private speculative finance through the various private rental social housing schemes, the ‘help-to-buy’ subsidy (for which there was no cost-benefit analysis done!), Real Estate Investment Trust tax breaks, the sell-off and leasing of local authority land to developers and the sale by NAMA at discount of land and property to vulture funds and investors.

The alternative approach outlined above is, therefore, urgently required. And that is why it is really important that the Apollo House and Home Sweet Home campaign gain sufficient public support to achieve this policy change.

41 thoughts on “The Housing Figures Don’t Stack Up”