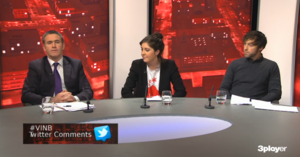 From top: Fine Gael TD Damien English, Rosie Leonard, of the Irish Housing Network, and Dr Rory Hearne, of TASC; a Dublin Region Homeless Executive graph showing the number of adults who have accessed homeless accommodation in Dublin since January 2014

On TV3’s Tonight with Vincent Browne, presented by Michael Clifford.

Fine Gael TD and Minister of State for Housing and Urban Renewal Damien English, Rosie Leonard, of the Irish Housing Network, and Dr Rory Hearne, of TASC discussed the occupation of Apollo House by the group Home Sweet Home and the current homeless situation in Ireland.

They also discussed vulture funds with Ms Leonard recalling Focus Ireland’s ‘Vulture Shock’ campaign from earlier this year when it proposed legislation to protect homeowners and tenants from being evicted, via vulture funds.

At the time, Focus Ireland estimated that 47,000 homes in Ireland were owned by vulture funds.

Readers will recall how, in it’s most recent annual report published just before Christmas, the Simon Community said it had worked with 8,297 people – including 897 families – in 2015.

In addition to that, nearly 7,000 are currently using emergency accommodation.

Michael Clifford: “Damien, what do you think of Apollo House and Home Sweet Home?”

Damien English: “Well, look, as you said, there’s great energy there and it’s provided people with accommodation over the Christmas. You know, it is true to say that there is other, there is emergency accommodation there. We generally believe we have, there is enough of a supply there, we’ve increased it by 200. But this, it’s a worthy cause… again, it’s temporary and we are, as a government, as priority number one, to put in place long-term solutions. We can’t fix everything, every item, overnight but we’ve an action plan, you’ve read it yourself and we can talk through that but, you know, what Home Sweet Home are doing is certainly, you know, raised the profile a bit, there’s no doubt about that but for us, in Government, and for anybody involved in politics for the last year or two, it’s been a high priority, priority number one.”

English: “…there is enough accommodation there and what’s happening at Apollo House it’s, again, it’s temporary…

Rosie Leonard: “Then why are people sleeping in doorways?”

Clifford: “OK. Do you have any problem with people, like Home Sweet Home, highlighting this issue…occupying buildings as they…”

English: “I can’t condone the occupying buildings that are illegal, right? I’ve no problem with raising the profile of the issue and on the thousands of people who want to help, absolutely, that’s great. There’s a lot of NGOs, who are doing great work, working with government over the last number of years on this as well. I’m sure they’ll avail of the energy. I can’t say. To me, it’s unnecessary to occupy homes. I believe we’re providing enough emergency accommodation. But apart from that, people are also transitioning out of emergency accommodation. And just to be clear, Michael, people need to know, because Rosie’s right, there’s some hope here – 3,000 people left homelessness this year and went into permanent accommodation but the problem was 3,000 more came…”

Clifford: “Homelessness is higher this year than it has been ever…”

English: “But I’m saying to you, the problem is, many more come onto it. But we have said, and we’re committed to it that, by June next year, there’ll be nobody living in emergency accommodation…we will fix this.”

English: “The trends that we can see are beginning to go the right way…”

Leonard: “There’s an average of 60 families that are going to continue becoming homeless every month this year…”

English: “From my point of view, from the department, from [Minister for Housing] Simon Coveney, myself and the department, we believe and we are confident, that we will have tackled that end of it by June.”

Rory Hearne: “Nama has been used as a way to show the international markets that Ireland is recovering and the way in which the Government has approached that is, trying to sell off, Nama is selling as much assets as possible, showing we’re paying down the debt. Nama itself being wound up early, returning, making a return to the taxpayer. But the fact, the problem with that approach has been that, in fact, that has worsened the crisis. Because Nama, by Nama selling off the assets so quickly, and in particular I would focus on the Irish ones, the international are different, it has meant that, for example, Nama itself has said that it has sold land that could build 20,000 houses but only 5% of those houses have been built because it has sold them to vulture funds, to investors who are hoarding the land. Also…”

Clifford: “On that, a lot of developers claim that one of the big problems they have is that it’s not worth their while building because of the cost at the moment and that that is much of the reason for the fact that only 5% of those lands have been developed.”

Hearne: “And that is exactly the point that why Nama should have sold that land and the point is it can still…Nama still has the land, it said itself, it can build 20,000 houses in the coming five years which would make a dramatic impact in the crisis but the problem is that those 20,000 houses, only 10% will be social, if even. And the rest will be sold to vulture fund investors because Nama’s mandate – that it’s operating under, under direction from the Minister for Finance – is to maximise the financial return to the taxpayer. The problem with that is it’s just selling assets that could be used for affordable housing and the issue is that Nama now has €3billion in cash reserves; it has paid down the majority of its debt. Those houses could be built as affordable houses if it sold them to local authorities, to housing associations and I think what has happened is the Government have looked on the housing system and the housing market and seen recovery in property prices as part of feeding into the narrative of economic recovery, rather than actually looking at how are we providing affordable housing and I think Nama is one key way that things could be done differently and can still be done differently.”

“The other issue is that they’ve promoted the introduction, the influx of real estate investment trusts. The Government introduced a tax break in 2013 which allowed real estate investment trusts write off a certain amount of their profits for rent because the Government has been about bringing in these investors to buy up the property, to give the impression that Ireland’s property bubble, crash has been dealt with…”

Hearne: “Kennedy Wilson [US investment fund] it’s been shown by the Freedom of Information Act, wrote to the government in 2014 and 2015, when there were talks of introducing rent controls…they were against the introduction of rent controls and the 4% increase in rent that’s been put in the rental strategy, there’s no evidence behind that. Why 4%? Why was it not inflation [Consumer Price Index]? And 4% is a yield to attract in private investors…at the heart of the problem is that the Government has not gone about approaching the housing issue with providing housing as a human right and a home. If you look at the action plan, the right to a home is not mentioned once in that plan.”

Leonard: “There’s no…another thing to add to that, there’s no preventative measures to stop the homeless figures from increasing. For example, there was an amendment proposed by Focus Ireland, into the new rental strategy bill. Focus Ireland have said that a third of all families being made homeless and presenting to them are because they’re in buy-to-let houses, the owners are selling up and they’re being forced out, evicted, because of terms of sale. And there was an amendment put in by Focus Ireland – to stop the terms of sale being used as the cause for an eviction in a buy-to-let house and that was voted down by Fine Gael. That would have immediately stopped a third of families who are becoming homeless and the 60, a month, on average, who are becoming homeless next year and that’s not even including people who are sofa surfing, who are hidden homeless, who are living in overcrowded situations and you declined that. So you’ve actually, you’ve actually said no to preventative measures that would have eased off the number of…”

Clifford [to English]: “Deal in general with the idea that Nama is not being used predominantly for the social good, as it could be, and it would tackle this issue, rather than as a vehicle to generate money to show the international community that the economy is doing well. Just deal with that issue.”

English: “I’ve heard that commentary and I’ve read a lot of what Rory has written on this aswell and it actually isn’t true…”

Previously: Apollo, Nama And You

The Class Of TV3

Anything Good On TV3?