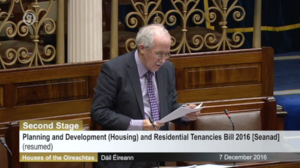 And how it was added to the Planning and Development (Housing) and Residential Tenancies Bill 2016 before Christmas.

However, on foot of advice from the Attorney General, the Minister for Housing Simon Coveney  increased this figure, from five to 10.

“Amendment No. 92 is known as the Tyrrelstown amendment. It provides for the increase in the number of dwellings to which section 35 applies from five to ten. The original figure was 20 dwellings and this was amended to five on Report Stage in the Seanad.”

“The purpose of the Tyrrelstown amendment was to indicate to institutional investors buying large-scale developments that when these properties are sold, the existing tenancies in those properties will be protected.”

“The figure of 20 units was chosen because anything above it represented a medium-sized development. I want to ensure that when medium-sized and large-scale developments are bought and sold, tenants will be protected through the process in order that we will not have a repeat of what happened in Tyrrelstown.”

“By and large, these developments are managed by professionally-managed funds, professional landlords and so-called vulture funds. In drafting the Tyrrelstown amendment, the Department was aware that restricting the use of the ground of sale to terminate a tenancy could be regarded as an interference with constitutionally-protected property rights. The number of dwellings was chosen to ensure that this interference was both proportionate and justified. I am told this is a requirement if we seek to proceed in this way.”

“Let us suppose a landlord has one property with a tenant and he is looking to sell that property. The rights of the landlord in terms of ownership and sale, and the potential reduction in value if he were to sell it with a tenant in it, interferes with a person’s property rights.”

“Let us suppose a landlord is an owner of 40 properties each with tenants. It is surely both proportionate and justified that the rights of those 40 would override the property rights of an individual in the Constitution. That is why when we have multiple numbers; it is both proportionate and justified to do what we are doing. However, if it is a question of the right of one person as a tenant versus the constitutional property rights of the owner as a landlord then there is an issue. This is what I have been told.”

“I have much sympathy for the spirit of what we are trying to do. I introduced the so-called Tyrrelstown amendment early. I did so not when the Bill was progressing but during the summer, because I took the view that it was the right thing to do. However, I cannot ignore legal advice either. I have taken legal advice from the Attorney General on this issue. While I am not seeking to return the number of dwellings to which the amendment applies to 20, I believe that, having taken the advice, ten is the appropriate number.”

“To be clear, I sought legal advice from the Office of the Attorney General after Report Stage in the Seanad because we were concerned about the matter at the time. In fact, I raised it with colleagues. While the number of units was reduced from 20 to five, the Attorney General advised that ten was the more appropriate number.”

Focus Ireland proposed an amendment to the Planning and Development Bill 2016 to protect all tenants of buy-to-let properties from being evicted or served termination notices, on the basis that their landlords were selling the property.

The amendment was moved by Tipperary Independent TD Seamus Healy (above).

However, it was lost with 43 votes for; 52 votes against and 25 abstentions.

Here’s how they voted. 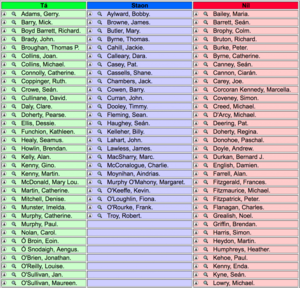 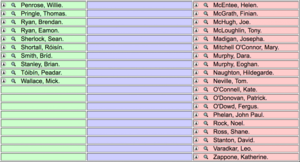 They spoke about the Tyrrelstown amendment and the rejected Focus Ireland amendment.

Stephen Donnelly: “…The Tyrrelstown amendment will help but there’s an awful lot more that needs to happen.”

Seán O’Rourke: “Remind us as well, of the numbers, there has be a certain threshold, above which there are numbers of apartments of being sold because if it’s down to ones or twos, it doesn’t apply, isn’t that right?”

Donnelly: “That’s right, yeah. I can’t remember exactly what the number is. I know it was brought down. There was very good advocacy from some of the senators, I think Mary Alice Higgins and some others were involved in trying to push the number down with Simon Coveney and I think they succeeded. But, I’m sorry, I don’t have the number off the top of my head.”

O’Rourke: “If I could turn to you, Mike Allen, director of advocacy with Focus Ireland, are you seeing now the early days of 2017, an increased demand or calling on your own services?”

Mike Allen: “Good morning, Sean. What we’ve been seeing over the last year is, we reckon around a third of families who are becoming homeless in Dublin are becoming homeless because their landlord has been forced to sell up, one way or another. And it’s very hard to know exactly what’s happening there. But, talking to the families in our services and elsewhere, there’s a strong sense that landlords, these particular landlords are being forced to sell up, either by banks or by vulture funds because they, themselves, have got behind in their mortgages. And the Tyrrelstown amendment, while it’s very positive for the places that it effects – Tyrrelstown in particular, in retrospect. You know, they’re trying to address that issue retrospectively. It doesn’t deal with the vast majority of landlords.

“Over 95% of Irish tenants have landlords with only one or two properties and that’s where, on a day-to-day basis, people are being forced into homelessness and an amendment which would have extended this sort of protection to all buy-to-let tenants was rejected by the Government and Fianna Fáil, and for the life of me, I don’t know why it was rejected. There might be some good reason but nobody bothered to come out and explain why they couldn’t extend that protection.”

“There’s over 15,000 tenancies where the landlord is in arrears for more than two years and, not all of those by any means, but a significant number of those tenants are completely unaware themselves but they’re at huge risk of being evicted and ending up in homeless services and we don’t seem to be doing anything seriously or urgently about that.

O’Rourke: “Stephen Donnelly, just to answer that question or maybe you might like to offer an insight that Mike Allen raised about why the Tyrrelstown amendment, protecting people’s tenancies, doesn’t apply in the case of, you know, a single or maybe one or two-property landlord.”

Donnelly: “I don’t know, it makes absolutely no sense. I mean it’s a very simple thing to do, to say, if you have a tenancy and the property you’re in is being sold through forced repossession, or whatever it is, that you’re protected. The tenancy, tenants, are protected. Every tenant in this country knows the legal protections available just aren’t good enough.”

Previously: ‘We Will Fix This’