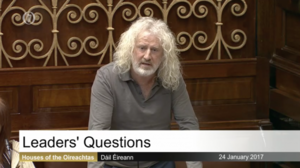 It follows a report in The Irish Times this morning which says the Government will launch a Commission of Investigation into claims made by former head of the Garda Press Office Supt Dave Taylor following a review of his claims by retired high court judge Iarlaith O’Neill.

Supt Taylor has claimed there was an alleged campaign within the gardai to ruin the reputation of Sgt Maurice McCabe.

He said the exclusion of claims made by other Garda whistleblowers – including those of Garda Keith Harrison and  Garda Nicky Keogh – from Mr O’Neill’s review made it a “flawed inquiry from the very outset”.

And he told how, just last week, the Minister for Justice Frances Fitzgerald received a letter from a  whistleblower about a witness statement being doctored by gardai in an assault case. Mr Wallace said the background to the case involved the planting of drugs by a garda.

Mick Wallace: “We read today that you’re about to commence a Commission of Investigation into certain Garda matters, following the O’Neill report. Yesterday, the Garda Commissioner [Noirin O’Sullivan] was on the airways, telling us how wonderful everything is and how wonderful she is herself – bombing us with doublespeak.”

“Meanwhile, Taoiseach, the harassment of whistleblowers continues. The Tánaiste last December said to me, in reply to a question, the Garda Commissioner is entitled to her good name, as indeed are people making allegations entitled to theirs, unless facts properly established prove otherwise.”

“Well, Taoiseach, David Taylor, who was interviewed for 21 hours, a file sent to the DPP in September 2015, 2015 – and there’s no decision yet. Nothing has been proven against him. Is the Garda Commissioner allowed to ride rough shod over fair procedure in this area? The commissioner said yesterday: ‘I have absolutely no knowledge nor was I privy to any campaign to undermine any individual in An Garda Siochana’.”

“Taoiseach, 14 times, Keith Harrison wrote to her, detailing his harassment and bullying. He’s out sick since May 2010. He’s on €188 a week and there’s three kids at home. Nick Keogh has got nothing but grief since he reported malpractice.

“The commissioner yesterday was boasting yesterday  about taking part in the fight against heroin. But she’s protecting the Chief Superintendent who’s been involved in the heroin case in Athlone. And last year, she placed a superintendent on the promotion list who has been accused on numerous occasions of harassing a whistleblower. ”

“In October 2015, the commissioner stated that she had commenced an investigation into this alleged conflict of interest. October 2015. Not a word of it since. I wonder where is it, Taoiseach?”

“Following the investigation into the matter, GSOC have asked for disciplinary procedures to be taken against them. Who does Noirin appoint to look after it? Yes, the very same assistant commissioner. Who also happens to be retiring in April so he probably won’t even get to the end of it and delay it all even further.”

“This month, GSOC asked to oversee the disciplinary procedure. GSOC’s request was refused. Taoiseach, when are you going to publish the report? Are you going to include the protective disclosures of all whistleblowers in the investigation, because if you don’t, it’s only a case of kicking the can down the road because we’ll eventually have to do it. And Taoiseach, do you intend to leave the commissioner in place while the investigation goes on because it will make a mockery of it if you do.”

Enda Kenny: “Mr Justice O’Neill was asked to review the allegations of wrongdoing. He was also asked to include any recommendations which he considered appropriate. The report, I understand, sets out in detail the allegations contained in the protected disclosures. I’m sure that the House will appreciate that in the view of the nature of the allegations, and the fact that third parties are mentioned, the Tánaiste referred this to the Attorney General for advice on how to proceed, including the question of what material might properly be put into the public domain, having regard for the rights of all concerned.”

“I understand that the Attorney General has given some response to that but has some further matters to conclude on. And I also understand that the specific proposals will come to Government shortly, including putting the conclusions and recommendations of Mr Justice O’Neill to the public domain, Deputy Wallace.”

Wallace: “Taoiseach, you haven’t answered any of my questions. Now while the Government sat on the O’Neill report, which you still haven’t told me when you’re going to publish, GSOC had to go to the High Court to force the Commissioner to hand over the transcripts of the O’Higgins Report – almost eight months since the Tánaiste requested GSOC to investigate the same.”

“Only last week Taoiseach, the minister got a letter from a whistleblower regarding a witness statement being doctored by garda, the gardaí, in an assault case. The background to the assault case related to the planting of drugs by a garda.”

Kenny: “The [protected disclosures] act protects gardai, if they make a report – either to GSOC or the commissioner – for having their identity revealed, protection from dismissal and protection from being penalised in their employment as a result of having made a protected disclosure. That’s the law of the land. That’s what the act says protects whistleblowers for. You mentioned, of course, that the minister did receive the report from judge O’Neill. There are third parties mentioned in this report and it’s only right and proper that we return to the Attorney General for advice as to in what form and what element it should be published. And, in the ministers engaging with the Attorney General on that matter, my understanding Deputy Wallace is that this will come back to Government very shortly including proposals to implement the findings that Justice O’Neill has, has recommended, following his report being sent to the minister.”

4 thoughts on “‘The Planting Of Drugs By A Garda’”