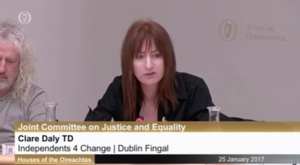 The proposed Judicial Appointments Commission Bill 2016 was discussed at a meeting of the Joint Committee on Justice and Equality.

The Irish Times reported yesterday that Chief Justice Susan Denham, who is due to retire in August, met with the Taoiseach Enda Kenny and Minister for Justice Frances Fitzgerald before Christmas – and then wrote to them earlier this month – to express her concerns about the commission.

During the committee meeting on Wednesday, Independents 4 Change TD Clare Daly spoke about the proposed bill and mentioned a case, she felt, involved “a complete perversion of the course of justice” by a judge.

“We are all very new to this process. It is a different scenario for everyone here.

I do not want to repeat points that have already been made but we had tabled a number of amendments to [Fianna Fail] Deputy [Jim] O’Callaghan’s Bill.

Indeed, we had amended our own amendments before we got to the committee and events developed. In advance of today’s meeting, we prepared a detailed critique of the Minister’s heads of Bill but it is possibly too detailed in the context of where we are at now. Therefore, I will give my initial reaction to some of the broader points raised. I will probably forget lots but perhaps we will be able to go into more detail later.

First, on the membership of the commission, specifically the lay chairperson and lay majority, this is something that we wanted at the time of the publication of Deputy O’Callaghan’s Bill. We are happy to see that included in the Government’s general scheme.

It is important to say that this is not about “one in the eye” of the Judiciary or the legal profession. It is about a particular view of the judiciary. People with a legal background, very understandably, see appointment to the bench as a career progression and as something that should be controlled by experts.

However, for ordinary people, the appointment of judges is a social matter. They see judges as people who work for society, not for the legal profession, and therefore it makes sense for judges to be appointed by members of the society they serve and for them to be allied to the needs of society.

It is a difference of view and balance is achieved by equal representation on the appointments commission. The best way forward is to give both sides their due, so to speak. While it is unusual to have an even mix of lay people and legal experts on an appointments commission, it is interesting to note that when Scotland reviewed its procedures before introducing primary legislation, one of the points made was that a particular strength of the system was its even mix.

While I am not in any way casting aspersions on their integrity or their fitness for office, nonetheless they came into their positions in that way. I do not see the purpose of including the Attorney General on the commission. I do not see what insights or skills he or she might add and perhaps an additional member of the judiciary would be a better option.

There are points to be made about the legal members being nominated by the Bar Council and the Law Society. We would certainly have questions about that. Obviously, it is no secret that issues have arisen regarding senior members of the Law Society. There have been many cases of litigation and High Court proceedings in this regard.

Similarly, questions about procedures at the Bar Council have been raised with regard, for example, to its nominee to the Legal Services Regulatory Authority. The Bill provides that judges should be appointed on merit.

We would prefer to see a system involving an open, public competition, with some minimum qualification requirements, like years in practice or some such. That could possibly be run by the Public Appointments Service, PAS, as per the lay members.

Alternatively, as has been suggested by others, the Bar Council’s nominee could be elected by the entire membership of the council, as in the recent selection process for the practising barrister panel of King’s Inn. A similar process could be engaged in by the Law Society.

We are of the view that the legislation should stipulate that the lay membership should exclude anybody who has practised as a solicitor or barrister, either over a period of time, for example, two to five years or forever. That is something worth considering.

The expertise of lay people and that being quantified in some way is necessary. I note that in the Minister’s heads of Bill, we have a list A and list B of expertise criteria. Our reading of it is that list A is fine but list B is very restrictive and would limit the types of people who would be able to come forward.

We believe it is important for a wide range of professions or disciplines to be allowed to be considered for the commission. Under list B as it stands, the only people who could qualify would be senior civil servants, solicitors and barristers. We definitely need to expand that category.

The explanatory memorandum provided notes about the types of lay expertise but we are keen to add to the A list people who have a background, for example, in sentencing, penal reform, perhaps addiction and working in the area of drugs. Such experience would be important.

Deputy O’Callaghan made some good points about how the lay people might bring their political views to the table, for example, pro-life, anti-abortion, pro-choice or whatever else. That is equally the case with anybody in society.

A legal person could similarly want to be involved in the commission for precisely the same reasons. We must test the expertise of all. We are talking about merit and that must apply to all members of the commission.

We proposed an amendment to Deputy O’Callaghan’s Bill about the making of appointments to the commission in terms of meeting the gender balance. That is a difficult issue because in the initial stages in particular one must recognise that currently there are huge gender imbalances in the legal and judicial profession and forcing a 50:50 split now would not give the best expertise because of this.

We must strike a balance between trying to achieve a gender balance, which will probably only come in time rather than insisting on it as an absolute. How we formulate that will be important.

Reference has been made about the diversity clause, which we believe should apply to the legal and judicial members as well. I do not wish to spend a huge amount of time on the issue but in terms of head 10, for example, the code of practice function, we think it is very novel. We had not suggested it and Deputy O’Callaghan had not either.

There are some very good ideas in the Bill but we have concerns about it at the moment in terms of how it is phrased in the heads, for example, why a subcommittee of the commission is necessary to carry out the code of practice function rather than everybody on the commission doing it.

It is worth pointing out as well that it would not be possible to constitute a committee of seven members in proportion to the membership of the commission as given the way the numbers break down it is not mathematically possible for one to have people so one would not get the balance based on the proposed approach.

While giving the commission an important role in monitoring and implementing international best practice on the appointment of judges to inform the selection process is no bad thing there could be a certain long-fingering involved. I tend to agree more with Deputy O’Callaghan in terms of the points on head 22, his section 15.

By contrast, we would be leaning more in favour of his section 15 rather than the Minister’s head 22, which is about the list of requirements in relation to the appointment of judges. The Minister’s list is extremely thin and Deputy O’Callaghan’s has much greater weight and is far better in that regard. We would tend to err in that direction, without repeating any points.

Deputy O’Callaghan’s Bill empowers the commission to make a recommendation to Government for such senior appointments based on merit, a similar principle to all other judicial appointments.

The power is vested in the Government because we are told it is required constitutionally and that the Government cannot be constrained in the manner in which is suggested throughout. I question some of what has been said and I would like to hear more in that regard.

We have a number of detailed points on the various heads but they are probably too detailed for the present discussion. They probably touch off the broad points to which we would refer in this regard. We are open in our approach. I agree with what Deputy O’Brien said about whether there should be nominating groups for lay people or a role for the Public Appointments Service or if we should have some middle ground in that regard. It would be important to get agreement but we are very happy with the overall balance and having a lay chair. We think that things could be progressed.

The Minister referred to the judicial council Bill and that element of the work. It is at least as important if not more important for us to address those issues. There was some talk that the Bill would be fast-tracked and done in tandem with this Bill. That is necessary.

Part of the project is to engender confidence in the judicial process. Not only have serious issues been highlighted about judicial indiscretion or the irrationality of judges in relation to cases involving me or others but it is almost a daily occurrence that members of the public find things difficult, in particular at District Court level, and do not have a mechanism to call into question poor practice by the Judiciary.

It is about justice being seen to be done. Only last week Deputy Wallace and I met a serving member of An Garda Síochána who told us that in a family law case a judge had intervened with his partner’s family and discussed the case with a family friend outside the norms of the court and gave the person a protection order against the individual.

It was a complete perversion of the course of justice that a judge would informally deal with a family law case in such a way and give an order. That judge is still serving. There are many such issues and there is an urgent requirement to address them. 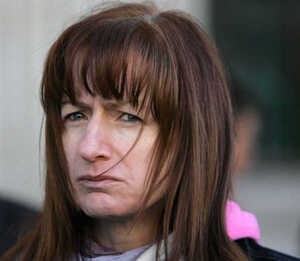 “We Climbed Over The Fence” 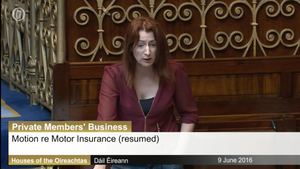 10 thoughts on “And Justice For All”