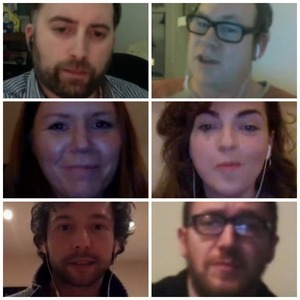 It’s not a hostage video until they say so.

A very warm thank you to Conor McKeogh, Johnny Keenan, Olga Cronin, Edel Brady and Mike McGrath Bryan – Broadsheet on the Telly‘s panel from last night/early morning. Germany-born Dundalk-based Marcel Kreuger, could not appear as he was tending to his wife, who was involved in a minor traffic accident earlier yesterday.

Views were aired, tay was drunk and some measure of ‘chat’ was achieved despite a five-minute faulty mic feedback-athon. Thanks for your patience.

Broadsheet on the Telly episode 2 can be viewed in its raw entirety here.

If you would like to take part in future shows please send a short bio to broadsheet@broadsheet.ie.

We are working on all your suggestions and advice to make Broadsheet on the Telly a better viewing experience. Except the ‘nekkid’ idea. Thank you.

Thursdays Will Never Be The Same Again

33 thoughts on “Some Feedback Feedback”