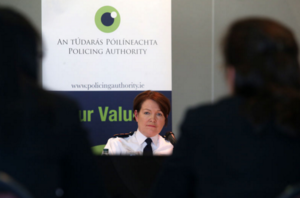 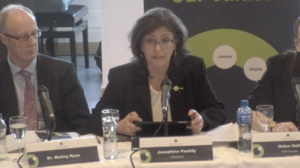 From top: Garda Commissioner Noirin O’Sullivan and chair of the Policing Authority Josephine Feehily at the Griffith Conference Centre in Dublin yesterday

During the interview, Ms Feehily was asked if she had confidence in Ms O’Sullivan.

In addition, during the interview, Ms Feehily referred to a report by RTE journalist Paul Reynolds, on Thursday, February 16.

This was eight days after Labour TD Brendan Howlin claimed in the Dail that a journalist had contacted him to tell him “they had direct knowledge of calls made by the Garda Commissioner to journalists in 2013 and 2014, in the course of which she made very serious allegations of sexual crimes having been committed by Sgt Maurice McCabe”.

Mr Reynolds’ report on February 16 stated that the Policing Authority had expressed confidence in Garda Commissioner Nóirín O’Sullivan and senior garda management via a statement.

In an online report, RTE reported:

“In a statement this afternoon, the authority said it is satisfied with garda management’s ability to do its important, challenging, and difficult job.”

From this morning’s interview:

Josephine Feehily: “We think that it is hugely important, now that the decision has been made by Government, to have an investigation, that it is held in public and that it moves along at a pace to bring, to bring finality, hopefully, to a saga that’s been running for a very long time. Which is potentially corrosive, potentially damaging for public confidence and policing and damaging for the moral of the men and women who work in An Garda Siochana, whether civilian or otherwise. It’s also, I suppose the authority, the authority’s remit is about policing, it’s management, some of it is tedious, some of it is boring. But it is about being persistent and pressing the Garda Siochana to implement their plan to deliver on their targets and to achieve their objectives. And we really need this out of the way because, in the last couple of weeks, policing got lost in the noise around all of this. So, for all sorts of reasons. But it’s also important, I think, that all parties get a chance to say their piece and I’ll say no more than that, about the matters before the tribunal.”

Sean O’Rourke: “One of your colleagues on the authority, Maureen Lynott, felt it necessary towards the end of yesterday’s session to offer a word of warning it could be called, to the members of the Garda management that they should be aware of the dangers of falling into group think, as they prepared for that. Is that a concern that you would share?”

Feehily: “Well I think. Maureen is a very, very experienced person, working in lots of large organisations and I think rather than a ‘warning’ it was perhaps more by way of advice. We have a concern about the culture of the gardai. This is not a concern that’s new to the authority. There are books and tomes written, back to Morris [Tribunal] and so on about that. We pressed the Garda Siochana last year, following O’Higgins [Commission of Investigation] to do a culture audit and they are now out to tender for that to be done by a professional firm. So, I guess it was in the context of our concern about culture and ethics which we talked a lot about yesterday because the authority has launched recently a code of ethics for the Garda Siochana. It was in that context of culture, of closed-ness. Closed organisations, and it’s not unique to the Gardai, can fall victim to group think, that’s just a fact. So, I think I would say advice rather than…”

O’Rourke: “Yeah, and you also had a, I suppose, a little caveat that you entered yourself when one of the members of the other side of the management team was talking about how they appreciated the support of the authority in the way they were implementing the code of conduct and you, you slighted resiled or resisted that motion, that you were supporting them, what exactly is your motivation there?”

Feehily: “OK, this is about the protected disclosure policy and what he actually did was he welcomed our endorsement and that was just going too far from the authority’s point of view. The background to this is that, last summer, following O’Higgins, we called on the commissioner to publish the protected disclosure policy of the Garda Siochana, this is a requirement in law. Every organisation, certainly the public sector has to have one. So, the policy was published, the authority reviewed it. It found some deficiencies in the policy. We shared those back with the gardai. They accepted some of our recommendations, some took a little bit of encouragement to get them to accept. Others then, they haven’t chosen to accept just yet. So, in that context, endorsement was just a bridge too far for me. And we will be working with them, over the next year, to push those recommendations a bit further.”

Feehily: “Well, the original contested area was about the motivation of protected disclosures. Which is not, the Act is very clear that motivation cannot be a factor when you’re assessing how to, when you’re assessing a disclosure. You can’t question the motivation. You have to take it as it is and assess what it stated in it. So, that was the first contested area. And they’ve accepted that and they’ve changed policy and that’s good and we welcome that. The other contested areas have to do with location of the responsibility for protected, for handling. I made the remark afterwards to the same gentleman that, you know, having the function, even partly located in a part of the organisation called internal affairs could be somewhat chilling. So those are the areas of our concern…”

O’Rourke: “Going back to the start of your answer, motivation, of course, is at the heart of matters which will be explored by the tribunal now, the Charleton Tribunal of Inquiry. And the authority took the view that, and this is a matter of public controversy, that for the duration of the inquiry, it wasn’t necessary, it’s not necessary for the commissioner to step back from her position. What led you to that decision?”

Feehily: “I suppose what led us to that decision was the same that what led many other commentators to that decision, it’s  a matter of fair procedure. It’s a matter of fair procedure. It’s a matter of everybody, whether it’s the, in this organisation or any other organisation, being entitled to their good name, be entitled to fair procedure, being entitled to have their side heard. And I suppose that the other point I tried to make yesterday, maybe not strongly enough, there’s a very clear provision in the law that says the Commissioner is accountable to the minister and the Government. The Government, having decided that the only way that they could adjudicate between matters that were put before the minister in protected disclosures was to have, first, a commission, and then a tribunal. We had access to nothing, could not come to a different conclusion.”

O’Rourke: “In other words, it wasn’t your job to make a ruling on that?”

O’Rourke: “So, did you feely, why should you have said anything about it so?”

Feehily: “We actually didn’t say anything about it…”

Feehily: “Well, no, I think I maybe should explain. We didn’t say anything for 10 days because the matters that were being debated were not our job, they weren’t within our remit. And to be honest, Sean, and I think you know this very well. The story was moving extremely fast and it became political very quickly and that’s something we absolutely have no role in because we’re apolitical body.”

O’Rourke: “Going back to what you said, sorry…”

Feehily: “But we didn’t issue a statement, I’d like to clarify that because the notion that we issued a spontaneous statement of support, we were asked a question by your colleague Paul Reynolds and we have a principle of transparency, so we answered the question and we expressed confidence in the senior team of An Garda Siochana to do a very difficult job and, by extension, of course the senior team includes the Commissioner. So that’s actually what happened.”

O’Rourke: “Do you, as chairperson of the Policing Authority, have full confidence in the Garda Commissioner’s ability to do her job while this Charleton Inquiry is going on?”

Feehily: “I would say we have a degree of confidence but we are concerned. And I’m not saying that that’s a deep concern at this point. The Tribunal hasn’t begun but we have flagged that concern to the commissioner, we asked her the question in public yesterday and so I think it remains to be seen whether, as I put in my remarks yesterday, the accelerator can be kept to the floor in policing and in modernising the organisation while servicing a tribunal. So, it’s a question. We do have confidence in the commissioner’s and her senior team’s capacity to run the guards.”

O’Rourke: “Right, but if events at the tribunal raise, or increase, the level of those concerns, what do you do about it?”

Feehily: “We’ll see when it happens. It will depend significantly on context and whether, something in which we have a rol

O’Rourke: “That’s a less than a wholehearted endorsement of the commissioner, if I may say so?”

Feehily: “It’s, it’s not a, it’s a wholehearted endorsement, in terms of her capacity and the capacity of herself and her team to run the guards . It’s the, the, how will I put it, the parallel running of a very complex organisation that does need to keep the foot on change and modernisation while servicing a tribunal. And until that stats to play out, I’m just saying we don’t know.”

7 thoughts on “‘We Have A Degree Of Confidence’”