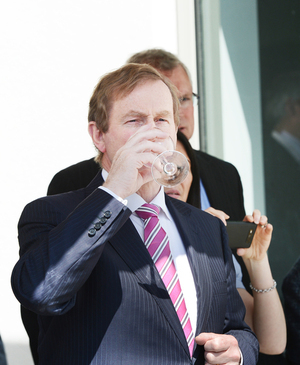 ‘It’ is etched on the worried face of a young mother walking from Cork to Dublin.

‘It’ is CF sufferers huddled and masked in protest outside a newly refurbished Leinster House. ‘

It’ is Grace betrayed by unaccountable shadows.

It’ is Megan’s twisted spine, her publicly promised operation cancelled when the camera is turned off

‘It’ is whistleblowers criminalised.

‘It’ is the tears in tissues beside the computer after the weekly Skype to older children and grandchildren who may never be seen again toiling in far flung corners of Australia or America.

‘It’ is Dublin Airport Christmas week where broken hearts will brim with joy once again reunited, squeezed half to death with years of missed embraces condensed into minutes only for those hearts to be ripped asunder weeks or even days later as loved ones leave a country that has failed most of us.

‘It’ is the fear of never seeing elderly parents again save to bury their bodies in graves that will never be tended or prayed over by the generation they raised.

‘It’ is skipping meals to pay bills that were never ours.

‘It’ lies freezing on unwelcoming streets, in Georgian doorways or crammed in hostel hotels with no dignity, forever destined to live in the margins.’

It’ is newspapers advertising thousand euro coats ripped up to cover holes in the soles of shabby shoes.

‘It’ lies dying on hospital waiting lists. ‘It’ is social immobility denied yet propagated by the same affluent few generation after generation.

‘It’ is protesters criminalised in courts at the behest of billionaires who will enjoy immunity from criminalisation in rich men’s tribunals.

‘It’ is a Dail that fails to hold government to account.

‘It’ is in the breaking of a people forced to protect banks and bondholders who will never be stooped by the burden of ‘it’.

‘It’ is a hundred years of right wing government, of broken promises, of pandering to a privileged elite.

‘It’ is a tale telling Taoiseach.

‘It’ is a country divided by wealth and influence. ‘It’ is knowing there is a better way sold out for petty political positioning.

‘It’ was never just about water.