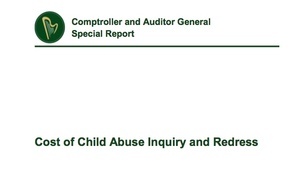 This morning, The Office of the Comptroller and Auditor General published a  report on the cost of the child abuse inquiry and redress schemes.

The work of the Commission to Inquire into Child Abuse and of the Redress Board is largely complete. Costs to the end of 2015 of the child abuse inquiry and redress are an estimated €1.5 billion.

Both the cost to the State and the time required to bring the process to a conclusion have hugely exceeded original estimates.

The Commission’s work cost an estimated €82 million – the Department of Education and Skills initially forecast the cost at €2.5 million.

The final report of the Commission, often referred to as the Ryan report, was published in May 2009.

The redress scheme accounts for the largest element of the costs, at an estimated €1.25 billion.

The original forecast cost of the scheme was €250 million.

Outside of the redress scheme, other supports have been put in place to assist the former residents of the institutions. The overall spend on health, housing, educational and counselling services is estimated at €176 million.

Government policy was to pursue the sharing of the cost of redress on a 50:50 basis with the religious congregations.

This would require the congregations to contribute €760 million.

To date, the congregations have offered the equivalent to about 23% of the overall cost.

Contributions received from the congregations up to the end of 2015 represent about 13% of the cost.

An indemnity agreement was signed in 2002 between the State and 18 religious congregations, who agreed to contribute to the costs of redress by transferring property, cash and other resources totalling €128 million, of which €21 million remains to be transferred to the State at the end of 2015.

Following the publication of the Ryan Report in 2009, the congregations offered additional cash and property valued at €353 million.

This combined offer was revised to €226 million

in September 2015. Six years after the publication of the Ryan report, only €85 million (38%) of the €226 million offer has been received by the State.

Yesterday:  Spotting The Woods For The Trees