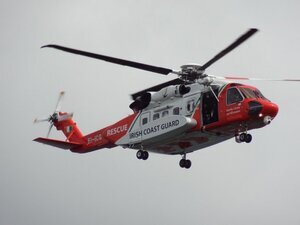 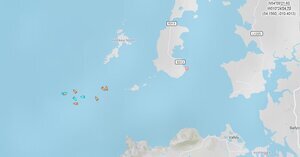 A Irish coastguard helicopter has gone missing off the west coast of Ireland with four crew members on board. A search is underway six miles to the west of Blacksod Bay in County Mayo to find Rescue 116.

One of the four crew members has been found among debris in a critical condition,…. The search party reportedly includes helicopters and local fishing boats.

The helicopter was providing top cover for the Sligo-based R118 helicopter, which was involved in an medical evacuation of a fisherman over 100 miles off the Mayo coast.

The R116 was preparing to refuel at Blacksod lighthouse when all contact was lost and disappeared from radar. Its last known location was approximately eight miles off the coast at Blackrock lighthouse.

Once contact was lost, an extensive search and rescue was put in place, involving the Achill and Ballyglass lifeboats along with R118.

Debris from the helicopter, including the aircraft door, have been located close to the aircraft’s last known location.

Coastguard chief Eugene Clonan on vessels and aircraft deployed search and rescue operation off the coast of Mayo #3News pic.twitter.com/l2YQhzrqg6

Sad news from Mayo that Capt Dara Fitzpatrick, Pilot of Rescue 116 has been confirmed as deceased. RIP #Rescue116 pic.twitter.com/cpu5Me8tL5