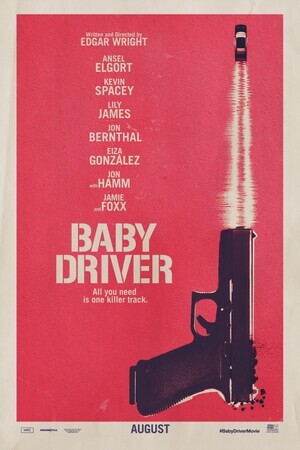 1. Here comes the new one from Edgar Wright, director of Shaun of the Dead (2004), Hot Fuzz (2007) and The World’s End (2013), sometimes known as the Three Flavours Cornetto trilogy. You’d have thought the trailer would signpost that fact, but it looks like a bit of a tonal shift for him so perhaps you don’t want to create an expectation of the same kind of slapstick comedy and endless film references.

2. Wright was also responsible for Channel 4 sitcom Spaced (1999 – 2001) and the underappreciated graphic novel adaptation Scott Pilgrim vs The World (2010).

3. Baby Driver sees Ansel Elgort (The Fault in Our Stars) play the title role as an unnaturally talented driver who puts his skills to work as a wheelman for Kevin Spacey’s idiosyncratic armed robbers. That is until he meets the girl of his dreams and sees a way to get out of the criminal life before his ruthless boss blackmails him into one last….wait a minute, we’ve got déjà vu…

4. The similarities to Drive (2011) are certainly there, right down to the hero’s savant-like skills, but that was hardly a groundbreaking work itself. According to Wright, his film owes more of a debt to Walter Hill’s The Driver (1978) than anything else. Also, given Wright’s track record, you’d hope Baby Driver has a similar surfeit of ideas that would give a well-told story a feeling of freshness.

5.The film, while not a musical, is entirely driven by music happening within each scene – i.e. what’s Baby’s iPod rather than on a soundtrack or score. (It’s less common than it sounds). The film takes its title from this Simon & Garfunkel song.

6. The supporting cast includes Spacey, Jon Hamm, Jon Bernthal, as well as (if rumours are to be believed), an uncredited Meryl Streep. Oh, and Flea.

7. Wright has also been busy with Marvel in recent years. He was slated to direct Ant-Man (2015) but left the role after shooting had begun, while retaining screenwriting and executive producer credit. Given his hyperactive directing style, it’s a good bet he wanted to do something “different” with the otherwise indistinguishable Marvel universe, but Kevin Feige and the lads had different ideas. That’s a question of ‘who knows best?’ Look what happened with Rogue One last year, for example.

8. Aswell as being needlessly long, this trailer struggles to put across the tone of the film. It’s colourful, with plenty of pause-for-a-one-liner moments, but none of them seem particularly funny. Spacey is playing it straight, while Foxx and Flea are not, and Elgort is somewhere in between. The vehicular stunts do promise there’s plenty more where that came from though…dig those donuts and reverse-180s. The reviews from its premier last weekend at SXSW are mostly very positive.

9. Variety calls Wright’s style of directing “a bit like someone smoking in a fireworks factory”: packed with potential but with the possibility of all going horribly wrong at any moment. Sounds about right.

Verdict: Bad trailer for a great film? Let’s hope so.