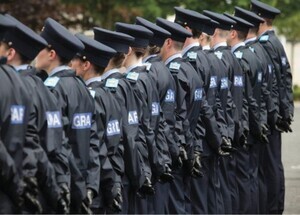 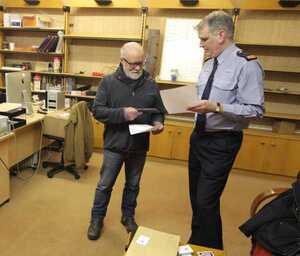 From top: Passing Out at Templemore; Eamonn Farrell (left) hands over a disk of images from a Pegida [anti-Islam group] rally in Dublin after a warrant was presented by Garda Inspector Des McTiernan (right) in March 2016.

A force that has become its own worst enemy.

Finally, the end of the road for An Garda Síochána, as the Government announce “a root and branch review” of the organisation, which for too long has travelled its own path, ignoring the attempts of governments to carry out corrective actions and refusing to recognise or cooperate with the oversight bodies installed at various stages to try and rein in the growing abuse of its position as guardians and protectors of the citizens of the state.

With mounting evidence of abuses of power, corruption, and the use of illegal methods to obtain prosecutions, finally culminating in what seems to be a brazen attempt to deceive the Government and its citizens, as to the effective carrying out of its duties in the area of road safety, by fraudulently massaging statistics, regardless of the damaging effect this would have on the lives of sections of the population.

Despite this, the Government has been slow to act, at all times finding excuses to avoid accepting the reality that this was not the actions of a few individuals, but the result of the institutionalised inward-looking culture of a force which has become a law onto itself.

The recent disclosures bring into question the reliability of its detection figures in relation to crime and indeed the safety of convictions at all levels.

It is ironic that this has come to a head during the tenure of the first female head of the force. There is a suspicion that she took over the role with an agenda for change, but faced distrust, opposition and animosity from the male dominated management team which she inherited.

An animosity which found expression among some of the crime correspondents whose cosy relationship with the old guard was suddenly disrupted. Resulting in negative media comment regarding her support in the force, which made it more difficult, if not impossible to carry out her promise to reform the force in the time frame intended.

In the end such opposition may have backfired, as now finally the Government, under pressure from all sides, has decided that enough is enough.

And this time, political opposition and public anger may not allow them or any new government to stall in carrying out the root and branch changes required.

The illusion has finally been shattered, and hopefully out of the ashes will grow a force which will be trust worthy and upstanding and deserve the support and admiration of citizens of this Republic.

Eamonn Farrell is head of the Rollingnews photo agency.

15 thoughts on “A Law Unto Itself”