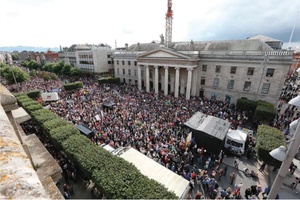 This Saturday, April 8, the Sinister Fringers are at it again.

But will you join the Walk of Shame?

That rabble, that great unwashed and of course those dirty Dubs will take to the streets on Saturday to crow their victory over us good law abiding citizens.

It’s almost as if they don’t know that removing water costs from central taxation and giving the gains away in tax cuts to top earners like us is good for them too. When us rich folks have more money in our pockets, we occasionally drop a few coppers into the grubby outstretched hand of some homeless serf, everybody wins.

When the charges were first introduced the fringers complained that bills in excess of 600 were ‘too high’, I ask you, really? The price of one nice evening at the theatre with dinner afterwards is ‘too high’ a price for them to pay so that we can cut our top rate tax? Pull the other one!
​
Out of the goodness of our hearts, we agreed to cap the charges at 260 until all the proles were paying before we’d up it over a grand and they still weren’t happy!

Two hundred and focking sixty euro people, that’s 1 bottle of half decent wine, just drink something cheaper for a night, problem solved. Enda was wrong to give an inch to those whingers, should have locked the whole lot of them up.

Now that we’ve ensured  a white collar only jury, that rabble rouser Murphy will get his comeuppance, the naivety of the hard left to think they’d get a fair trail in this country, Anglo friends stick together suckers.

It’s the country people I feel sorry for, forced to live in 6 bedroom mansions on sprawling lawns, they’ve been paying for water forever. Although forcing water charges on the sinister fringers won’t change the need for wells and septic tanks for our less fortunate country cousins, it will make them feel better to see the proles hammered into the ground, fair’s fair.

I hope they choke on their ‘Walk of Shame’, how dare they stand up to us. Why can’t they get it through their thick heads that they don’t matter, their votes don’t matter,

I know exactly where I and those like me won’t be on Saturday April 8th, we won’t be at Connolly or Heuston stations at 2pm.

Earlier: A Tide In The Affairs Of Men

55 thoughts on “The Great Unwashed”