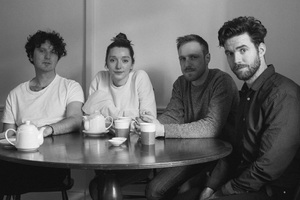 Come On Live Long – soundscapes and breathy vox from Dublin

01. Last time we checked in on Dublin four-piece Come on Live Long, they’d just launched single For the Birds with a gig at the Unitarian Church in Dublin.

02. Since then, they’ve been busy preparing their follow-up album to 2013’s Everything Fall, while vocalist Louise Gaffney also contributed to the sublime Glow, on Wicklow math-rockers Enemies‘ final album Valuables.

03. Streaming above is the video for new single Sum of its Parts, with footage taken by the band from the recording process.

04. It’s taken from upcoming sophomore album In the Still, available for pre-order on vinyl and streaming from May 19th.

Thoughts: A glimpse of something that could be absolutely breathtaking, from the less-is-more school of composition.