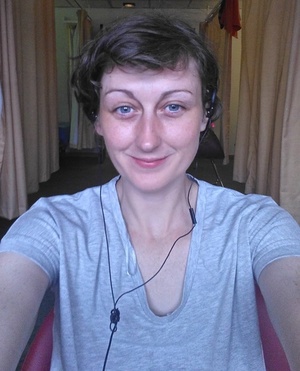 Dara, whose struggle with drug addiction and constant championing of the underdog informed her journalism, wrote from the heart with grit and humour.

She took enormous pleasure in challenging and taunting Official Ireland.

Her articles were among the best we have published.

The following is taken from a column written last September from her hospital bed following a Right2Water rally in Dublin.

Dara tells the readers what she would have told the marchers:

…Natural diamonds are formed under extreme pressure and time. This regime has created a generation of diamonds who sparkle because of their flaws, not in spite of them. Diamonds are also tough and if you think feet on the street scare this government, voting terrifies them.

It’s time to take our responsibilities as citizens seriously. I’ve been to hell and back but the devil met his match and there is nothing in any of this to be afraid of, unless you have something to lose and that isn’t anybody standing here today.

…I know how much voting terrifies this government, I tried to collect more than one voter registration form at Rathmines Garda station.

I was told it’s limited to one per person, this is simply not true. Who are the Gardaí protecting by limiting voter registration forms? Certainly not the citizens.

We are taught, from an early age, to fear revolution, we are told it leads to civil war. Does this feel like civil war to you?

Or does it feel like fun? Have some fun, report these crimes, march on your local station to register your whole area to vote and get out next Saturday for Repeal the Eighth march in Dublin.

Our economy and society is modeled on the behaviour of pigeons, survival of the fittest, everybody out for themselves.

The reality is more complex and beautiful than this regime can possibly imagine. In reality, we are more like a flock of starlings, producing intricate, amazing patterns all arising from one fundamental rule: no one bird is allowed to get lost.

This is the type of society I want to see, where no one person is allowed to fall between the cracks, nobody gets lost and no person is homeless. Jobstown are innocent.

Reclaiming The Right To Dignity

20 thoughts on “A Rare Diamond”