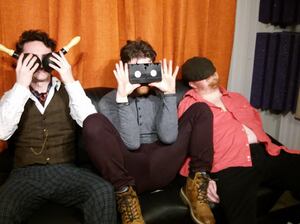 Does the prospect of “hallucinogenic piano-pop” tickle your feathers? If so, young beat combo Dr. Mindflip have what you’re after.

And they’re crowdfunding more goodies to tie in with their debut album, a concept piece based on cringe-cinema monolith The Room.

We have spent the last 2 years creating our debut – it’s a psychedelic B-movie rock opera (complete with voice acting and cinematic sound design) that we’re really excited about.

We’re running a Kickstarter fundraiser to make physical copies. So far, we’ve raised enough to create CDs and we’re halfway towards raising enough to do a vinyl pressing – it’s always been a dream of ours and we’re delighted with the support we’ve received so far.

The Kickstarter campaign is running until midnight on Friday 12th of May and you can view it here.

A Matter Of Record

1 thought on “For Your Consideration: Massive Pockets”