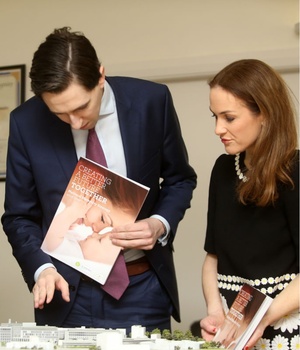 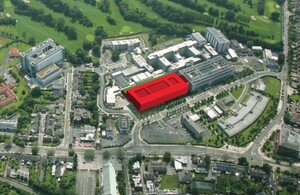 From top: St Vincent’s Healthcare Group, owned by the Sisters of Charity order; Minister for Health Simon Harris and Master of Holles Street, Rhona Mahony with a model of the intended National Maternity Hospital.

Last night A 25-page report on the terms of agreement between the National Maternity Hospital, Holles Street and St Vincent’s Hospital Group – as written by mediator Kieran Mulvey – was published by Health Minister Simon Harris.

We asked Legal Coffee Drinkers, what’s it all about?

Legal Coffeee Drinker: “It’s a report on the agreement (“the Agreement”) reached between the National Maternity Hospital Holles St and St Vincent’s Hospital Group regarding the new maternity hospital at Elm Park.”

Broadsheet: “According to the report, who will run the new hospital?”

LCD: “Clause 1.1 of the Agreement says that the hospital will be operated by a designated activity company called the National Maternity Hospital at Elm Park DAC (“the Hospital Company”).

Clause 4 says that the Hospital Company will in turn be run by a Board of Directors consisting of nine directors (“the Directors”) one of whom must be the Master.

The remaining Director will be an independent international expert in Obstetrics and Gynaecology appointed by a Selection Committee.

The composition of the Selection Committee, however, is not clearly stated, something which is particularly unfortunate given that the expert appointed by it could effectively have the casting vote on Board decisions.”

Broadsheet: “So that’s the first point of concern? What’s the next?”

LCD:  “Clause 1.2 of the Agreement which says that the Hospital Company will be a 100% subsidiary of St Vincent’s Hospital Group.

This means that St Vincent’s Hospital Group – and not the National Maternity Hospital Chartered Trust – will own the Hospital Company.

Under company law, shareholders of a company have the ultimate control of that company, having the ability to alter the composition of the Board of Directors or the objects and scope of operation of the company by amending its incorporating documents.

The concern is that St Vincent’s Hospital Group could, down the line, use its shareholder status to change the structure of the Hospital Company from that originally set up under the Agreement, undermining its entire effect.

Clause 3 of the Agreement seeks to safeguard against this by providing that the Directors shall be entitled to exercise in an undiluted manner and in a manner designed to preserve the autonomy and clinical and operational independence of the new hospital the power to provide maternity, gynaecological, obstetrics and neo-natal services and control, utilise and protect all financial and budgetary matters as they relate to the hospital and shall also be entitled to retain the existing Mastership model, appoint the Master and other officials and agree the annual SLA with the HSE (all of which are collectively described as ‘the Reserved Powers’).

It further states that a provision shall be inserted in the incorporating documents for the Hospital Company saying that the Reserved Powers cannot be removed save with the prior written and unanimous approval of all Directors of the Board and with the consent of the Minister for Health.”

Broadsheet: “So the Directors retain independence in the performance of maternity, gynaecological, obstetrics and neo-natal services unless they all vote to relinquish this and the Minister for Health also agrees?”

Broadsheet: “So that’s all right then?”

LCD: “Not necessarily. Firstly, although the reserved powers cannot be easily removed, they are powers, not obligations, given to a Board of Directors less than half of whom will be appointees by the National Maternity Hospital Chartered Trust.

The remaining members (who could potentially outvote the Trust appointees in all and any decisions relating to the hospital) consist of appointees of the St Vincent’s Hospital Trust and an international expert appointed by an as yet undefined selection committee. They are the people who will determine the extent to which the reserved powers are exercised in practice.

Secondly, the scope of the reserved powers are necessarily limited by the objects of the Hospital Company as defined in Clause 2 of the Agreement, which talks about providing

‘a range of health services in the community as heretofore’.

The words ‘as heretofore’ could potentially be relied on in the future to argue that new health services – possibly abortion, if legal, or new methods of assisted reproduction – fall outside the purposes of the hospital.

As such there are two ways in which St Vincent’s could potentially, under the Agreement, obstruct procedures in the Hospital of which they did not approve.

Firstly, they could argue, as regards procedures which were not previously carried out in Holles Street, that they fell outside the scope of the authority to carry out work ‘as heretofore’.

Secondly – and separately – they could, if supported by the international expert director, use their influence on the Board of Directors to outvote the Master and nominees of the National Maternity Hospital Chartered Trust and in this way prevent the procedures being carried out.”

Broadsheet: “What about the ‘triple lock’ referred to by Master of Holles Street Rhona Mahony?”

LCD: “The triple lock referred to by Dr Mahony locks one door by which St Vincent’s could seek to obstruct such procedures. It does not ‘lock’ the other two doors mentioned above, which are left open by the use of the words ‘as heretofore’ in Clause 2 and the failure of the Agreement to clearly define the composition of the Selection Committee which will appoint the Independent Expert.

The report on the deal states:

‘The independent international expert in Obstetrics and Gynaecology will be chosen from a list of candidates drawn up by SVHG and the NMH Trust.

They will be assessed by a Selection Committee, chaired by the SVHG Clinical Director,and the other members will include the SVHG CEO and a representative from the NMH Trust.

Any proposed nominee will be appointed by the Selection Committee after consultation with the SVHG Nominations Committee.’

Broadsheet: “So St Vincent’s could potentially use these two doors in the Agreement to control the hospital’s future activities?”

Broadsheet: “One final question. Who will own the hospital if and when built?

Presumably what is meant is that the HSE will take a charge over the hospital land for the amount of the money expended. However if, as is likely, the building will increase the value of the land to significantly more than this sum, it will be the owners of the land, rather than the HSE, who will get the profit under such an arrangement.”

62 thoughts on “How Deal Leaves Doors Open For Church Control”