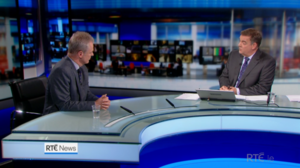 During the interview, Prof Keane mentioned that, during his seven and a half years working at St Vincent’s Hospital, he carried out two sterilisations.

Asked if he had to get clearance from someone above him to carry out these procedures, he replied, ‘Out of courtesy, I did discuss it with the medical director at the time’.

In addition, they also spoke about the memorandum of understanding between Holles Street and St Vincent’s in regards to the new hospital. This has not been published even though it’s been a week since The Irish Times reported that the Sisters of Charity will be sole owners of the new hospital.

Prof Keane said he believed the MOU would be published soon.

Meanwhile, this afternoon, The Irish Times is reporting:

[Health Minister Simon] Harris said while there is an agreement drawn up between the National Maternity Hospital and the St Vincent’s Health Group, over the next month, a contract between St Vincent’s and the State still needs to be written up and agreed to.

Readers should note that just after the Six One interview was finished, Minister Harris published mediator Kieran Mulvey’s report on the agreement between Holles St and St. Vincent’s. Legal Coffee Drinker’s thoughts on this report can be read here.

Brian Dobson: “We’re joined here in studio by Professor Declan Keane who is the clinical director of Holles Street Maternity Hospital, a former master of the hospital and a member also of the executive board. Thanks very much, Professor Keane for joining us on the programme. Before we come to the issues which are still being hotly debated on all of this, can I ask you about the situation in relation to Peter Boylan, a former master, a colleague of yours. He spoke out against the agreement that was published at the end of last year. Now, it turns out, he’s been asked by the master, the current master [Rhona Mahony] and by the deputy chair [Nicholas Kearns] of the board to resign. Is that a call that’s supported by all the board members?”

Dobson: “Right. So there was no consultation with, for example, yourself. You weren’t asked whether you would support this?”

Dobson: “Should the board members have been canvassed in relation to this?”

Dobson: “Were you satisfied that there was something within the authority of the deputy chair and the master to do off their own bat?”

Keane: “I think Dr Boylan probably sent some texts to the deputy chair on Sunday that made it very difficult for the deputy chair and the master to continue. I think it’s regrettable, I have great respect for Dr Peter Boylan as a clinician and as a colleague. But, you know, when he publicly goes against the consensus of the National Maternity Hospital, I could see the difficult position it put the chairman in.”

Dobson: “So, you support the call, do you? That he should go?”

Keane: “I think I probably would have liked more consultation on it but, as I say, and this will be discussed at greater detail when we meet as a board tomorrow.”

Dobson: “You see, I suppose, there’s a sense that he’s been got at because he’s spoken out. I mean he obviously has very sincerely held views in relation to all of this and people feel, perhaps, he should be entitled to be able to air those views.”

Keane: “I think Dr Boylan is entitled to share his views. I personally think, on this issue he’s wrong, which I think we’re going to talk about. But, as I say, and, as I say, I think it probably is regrettable that he’s been asked to resign at this point in time. But, as I say, we will be talking about this tomorrow.”

Dobson: “Ok. The central issue here is that, I suppose, the control, the governance of this new proposed hospital. And a lot of the concern arises because we’ve discovered, only in recent times, that the hospital will be owned by the St Vincent’s Healthcare Group, by the Sisters of Charity. A lot of people are scratching their heads about how that situation has arisen and what it might mean for the way the hospital operates.”

Keane: “Well, I mean, Brian, as you probably know, I mean, there was a lot of controversy last year about the clinical governance of how this new hospital is going to run. And I think there is a lot of us who’ve been involved in these discussions since 1998 who were fighting for the best deal possible for the National Maternity Hospital. Indeed, Vincent’s themselves had their own views on the matter and I think what we’ve come to, like a lot of things in life is a compromise that’s going to, that’s satisfying both sides. I have absolutely no doubt, as somebody who is also on the clinical staff at St Vincent’s Hospital that the current deal that we have is going to give us the clinical and financial autonomy that we were seeking. It also retains the mastership system which I think was critical for those of us who work in the national maternity hospital. And I’ve absolutely no doubt that the nuns will not interfere with the clinical workings in the new National Maternity Hospital on the Vincent’s site.”

Dobson: “So you would operate in both hospitals…”

Dobson: “And carry out the same procedures in both hospitals?”

Dobson: “Under exactly the same regime?”

Keane: “Well, I work in St Vincent’s Hospital and have done for over seven and a half years. And I have never had any of my gynaecological practice questioned or altered by the nuns or the board in St Vincent’s.”

Dobson: “So you’ve carried out, for example, sterilisations have you? On patients in St Vincent’s?”

Keane: “I have carried out two sterilisations on patients in St Vincent’s Hospital.”

Dobson: “And do they have to be cleared? At a level above yourself?”

Keane: “Out of courtesy, I did discuss it with the medical director at the time.”

Dobson: “And you got permission, or you normally would get permission from the medical director of the hospital?”

Dobson: Is that what applies in Holles Street? In the National Maternity Hospital? The same rules?”

Keane: “In the National Maternity Hospital, if we wish to sterilise somebody that is a decision that’s taken between the consultant and the patient.”

Dobson: “Entirely between you and your patient? The privacy of that relationship.”

Keane: “It is and that’s something Brian that we would see continuing when we move onto the new National Maternity Hospital in St Vincent’s?”

Dobson: “And is that clearly spelt out in memorandum of understanding, the terms of the agreement because, of course, that hasn’t been published. We’ve had bits of it released but we haven’t been able to see it in its totality.”

Keane: “Yeah, the memorandum of understanding, we will be able to continue doing all of the clinical work that we do in the National Maternity Hospital currently on the new site and that would include issues such as IVF, sterilisations, gender realignment surgery, all of that.”

Dobson: “You see it’s going to be a Catholic hospital, or at least, a Catholic-owned hospital and the Bishop of Elphin Kevin Doran has been saying, just in recent times, that a healthcare organisation bearing the name Catholic, while offering care to all who need it, has a special responsibility to Catholic teaching.”

Keane: “I think St Vincent’s themselves have come out with a statement, just before we’ve gone on air, that has said the new hospital will not be under any religious or ethnic authority and I’ve absolutely no doubt that that will be the case.”

Dobson: “Well, they say, they do say that in relation to all the medical procedures that are in accordance with the laws of the Republic of Ireland will be carried out in the new hospital, that’s their statement.”

Keane: “And that is exactly how we practice in the National Maternity Hospital currently.”

Dobson: “Can you cite the memorandum in that regard?”

Keane: “No, I mean, I don’t have the memorandum in front of me but I do know, as I say, from the negotiations that we’ve had with St Vincent’s Hospital, really since, you know, over the last two or three years, that we have got to a point where the agreement that has been reached is that we would be allowed to practice with full clinical autonomy on the site.”

Dobson: “I suppose, you know, it’s fair enough that you would have that confidence and you wold have that understanding but, for the wider public, to share that, they’re going to see more firmer evidence. Are they not?”

Keane: “But Brian, I don’t think we would be moving onto a new campus if we didn’t have that clinical autonomy. I mean if we didn’t have it, I think we would stay put on the National Maternity Hospital as it currently stands even though it’s a building that’s not fit for purpose. We’ve always thought that the most important thing that we will have is clinical autonomy and I’ve heard nothing from St Vincent’s Hospital today that would disagree with that.”

Dobson: “But, for example, when they say the procedures, you know, which are within the law of the Republic of Ireland will be carried out, does that include now and in the future? For example, if there were to be changes in the law on abortion would those services be available in the National Maternity Hospital, as it’s envisaged?”

Dobson: “And where in the memorandum of understanding is that clearly spelled out?”

Keane: “Well, it’s an agreement that has been reached between ourselves and St Vincent’s. It has been overseen by lawyers on both sides. As I say, I’ve no doubt that the actual memorandum will be released, you know, quite soon.”

Keane: “Very much more than an act of trust.”

Dobson: “And the memorandum, when it is published and released, will be able to show that?”

Keane: “I’m convinced it will be.”

Dobson: “And the concerns of Peter Boylan are unfounded?”

Keane: “I believe they are and I mean I’m saying that as somebody who works in both institutions.”

Dobson: “Well, there we leave it, Declan Keane, thank you very much for talking to us.”

13 thoughts on “Where’s The Memorandum Of Understanding?”