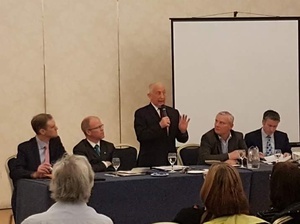 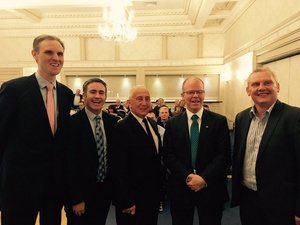 A funny thing happened at the Meath For Unity debate…

Sean kicked off proceedings with an account of his own personal experiences of north/south relations during his career. Shane followed with a historical context. Damien stressed the importance of consent beyond a 50% + 1 majority for unification. Peadar was excellent with facts, figures and the potential benefits for the Island as a whole should unification occur. John was brutally honest in his view that unification was a distant second for the unionist community behind the more pressing issue of Brexit.

The debate was then thrown open to the floor. Questions about Ireland in the Commonwealth were raised and answered. The need for more private business growth was stressed by Peadar.

I listened with interest to all the questions raised and answered. I was lucky enough to ask the final question. It wasn’t a premeditated question, it had occurred to me while listening to John and trying to see the situation from his perspective. I asked Damien:

“How can we be seen as a country for all the people of Ireland when Fine Gael gift the National Maternity Hospital to a Holy Order?”

The question genuinely electrified the room. Most recognised my effort to look beyond our own insular view of the situation but a sizable group became immediately irate and accused me of ‘Ambushing the Minister’.

It was not my intent to ambush Damien. For me it was the kind of nitty gritty question which would have massive ramifications if we are ever to reach a position where unification is a workable possibility.

Much to the anger of the majority of those present, Damien avoided the question by saying that it was a good deal with which doctors agreed and that we should all read the agreement (I have).

The palpable anger in the room at Damien’s non-answer does not bode well for Fine Gael. The issue of the National Maternity Hospital’s ownership is vital not only for women and their families, it has implications far beyond our current borders and is pivotal in how we in the south are perceived by our northern brethren.

The anger at grassroots level as to how the ownership of the National Maternity Hospital has been handled by Fine Gael is a very bad omen for Fine Gael. I have no doubt that when it comes to election time, the ‘little free stater’ attitude they have displayed on this issue will come back to bite them in a very big way.

The ownership of the National Maternity Hospital is not exclusively a south of Ireland issue, the world is watching, our neighbours are watching, Fine Gael has failed to realise that they are on a bigger stage, a possibility of unification stage.