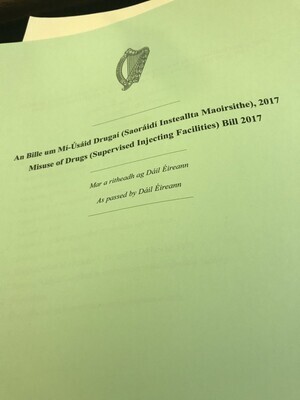 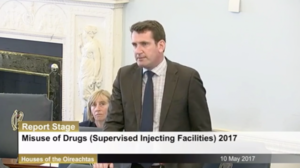 Aodhán Ó Riordáin, above, in the Seanad this morning and his Misuse of Drugs (Supervised Injecting Facilities) 2017 bill (top)

Of the move, Mr Ó Riordáin told the Senate:

“I just want to put on record An Cathaoirleach, if I might, the name of a man called Robert Keyes who died on the 8th of November, 2015, in St Audeon’s Park in Dublin, of a fatal overdose. When the person who came across his body rang the emergency services they said it was “just another junkie”.

“Now this man’s mother came forward recently, spoke about her son lovingly and caringly in the media, to say that nobody is a junkie in this country.”

“And what you’re doing today, minister, is to ensure, in this life-saving measure that we bring humanity back into our policy, our drug policy and we finally move beyond the situation where anybody would decide to dehumanise or to denigrate somebody with that disgusting term.”

“Everybody who is a citizen of this state is entitled to humane, compassionate treatment and if somebody is hopelessly crippled with an addiction, well they deserve the care and compassion of this state. And what this injection centre legislation is doing is providing that. That nobody else has to go to a park, or behind a skip or into an alleyway, or into a playground and inject themselves in such a harmful manner. Finally we will establish a facility that will ensure that people’s lives can be saved, that they won’t contract hepatitis C or HIV and that we can look on these individuals as people with names.”

“And maybe it’s time for a Names Project, that they have in the States, in terms of Aids. That in Ireland we could have a Names Project, that everybody who dies of an overdose, and we do have the third highest overdose rate in Europe. That maybe people who are affected by this and whose families are affected by this, people who approach me but won’t say it publicly, people who approach me and tip me on the shoulder and say, ‘my son died of an overdose’, ‘my brother died of an overdose’, that they can actually begin to speak about their names in loving terms.”

“Because they are not junkies, these are human beings who are being afflicted by addiction and this is the first step, along the Irish road to a proper tackling of this issue in a humane and compassionate way.”

The bill can be read here

Meanwhile, In The RDS