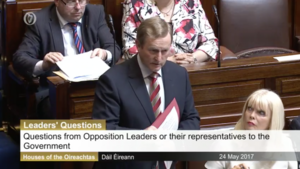 The acquittal followed solicitor with the Office of the Director of Corporate Enforcement (ODCE) Kevin O’Connell admitting that he had destroyed documents relevant to the criminal proceedings against Mr FitzPatrick, among other matters.

“The ODCE is a statutory independent body. Its mother Department, the Department of Jobs, Enterprise and Innovation, has no responsibility or power of enforcement. The ODCE takes its own legal advice. There were gardaí attached to the ODCE in the beginning but they were not involved in the way this case was taken. The judge did point out that the most fundamental error was the way in which they went about taking evidence from the auditors of Anglo Irish Bank, who were both from the firm of accountants involved.

He said that it was intended that their statements would be taken in the normal way by members of the Garda Síochána who were then attached to the ODCE. Instead, however, the statements were obtained through solicitors from a legal firm.

The ODCE pointed out that it has now undergone substantial organisational change and that it was simply not equipped to undertake parallel investigations on the scale involved. I want to say this: I have not spent the past six years as head of Government and making very difficult decisions only to hear again now the allegation in respect of white-collar crime that people can walk away, that nobody is guilty and that nothing is being done about it.

“Let us, as a Parliament, decide what we must do with an organisation like the ODCE. I can confirm that when the Minister for Education and Skills, Deputy Bruton, had responsibility for jobs, requests by the ODCE to his then Department for resources were granted. Now I find that the ODCE says it was simply not equipped to take parallel investigations on the scale involved.

“I can confirm that the Minister has asked the Director of Corporate Enforcement for a full report, including on the role of all professionals involved in this case. That report will cover the issues involved since 2008 when this case commenced – almost ten years ago. Nothing is ruled out.

“When Deputy Catherine Murphy had her full group, she put forward a proposition for a statutory standing body in the Dáil to deal with matters of corruption and so on.”

“The Minister will bring this before Government in due course. The Government will consider it next week, but I want the Minister to carry out an absolute review of what happened. It is not good enough.”

Earlier: A Moment Of Panic