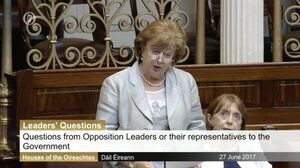 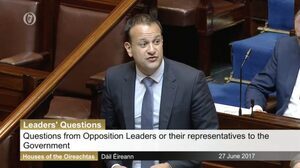 The Irish Independent reported that Kevin O’Connell, the legal adviser to the Office of the Director of Corporate Enforcement who shredded documents pertaining to trial of the former chairman of Anglo Irish Bank Sean Fitzpatrick – an action that contributed to its collapse – had sent emails to the Department of Jobs in 2011 complaining of a lack of resources and experience.

Journalist Niall O’Connor reported that these emails were only forwarded to the Government last month.

MrO’Connor also reported that “a report into the shortcomings of the case will confirm that Mr O’Connell has been moved out of the now under-fire corporate watchdog”.

Catherine Murphy: “Taoiseach, yesterday’s Irish Independent raised significant questions regarding the ODCE [Office of the Director of Corporate Enforcement] and their handling of the Sean Fitzpatrick trial which was the longest running criminal trial in the history of the State. The public reaction to the case was a feeling of being utterly left down. People read what happened in the courts, rightly or wrongly, and as another case of people with friends in high places and the sense of punishment only being for the little people.”

“In a week where the public debate rages regarding the operation of the courts and the judiciary, it must be said that cases such as the Fitzpatrick case have a significant impact on public confidence in a system as a whole.

“Yesterday the revelations in the Irish Independent seemed to suggest that the ODCE effectively misled the Department of Enterprise and therefore, Government too, regarding their ability, or lack of ability to effectively investigate the Fitzpatrick case and provide the DPP with the evidence required to prosecute.

“On the 31st of May this year, I received a reply from the then Minister for Jobs [Richard Bruton]. That reply assured me that, in 2011, the Secretary General of two departments, in Justice and Enterprise, had met the ODCE officials and offered extra resources if needed for investigation.

“The reply went on to say that the ODCE had claimed that they had no need for any extra resources. The reply clearly says that it was emphasised at the meeting that any requests for resources would be responded to positively. The reply confirms that the ODCE stressed they were satisfied with the resources that were available to them.

“Yet, in the reply to my colleague Deputy Shortall, in November 2015, it was claimed that the ODCE had flagged the need for further resources within their office, subsequent replies relating to that question indicate that there was a significant delay in meeting those resource requests – that’s obviously a significant issue in its own right.

“The Irish Independent claims that the email sent internally from Mr O’Connell, in 2011, about concerns regarding the lack of resources within the ODCE to pursue the Fitzpatrick investigation were only forwarded to the Department of Jobs within the last few weeks and we need to know if that’s true. We know that Mr O’Connell had, during the course of the investigation, shredded key documents and had also engaged in coaching witnesses and that ultimately, and that and other issues, ultimately led to the controversial collapse of the case.

“The questions I want to ask are: Can you explain the conflict between the Department of Jobs’ reply in May of this year to me and the same Department’s reply to my colleague Deputy Shortall in November of 2015.

“Does the Taoiseach worry that the ODCE may have concealed vital information from the outset, regarding their ability to pursue the Fitzpatrick investigation and does the Taoiseach believe the Government was misled by the Office of the Director of Corporate Enforcement?”

Leo Varadkar: “Thank you, deputy, I haven’t seen the report, it hasn’t gone to Cabinet. It hasn’t been published yet. I understand that parts of it may have appeared in a newspaper but I don’t know to what extent they are in truth or they are the full truth. And the report now has gone to the Attorney General and the Attorney General has to consider whether it needs to be redacted because, of course, individuals appear in the report and then may need to have their good name protected.”

“But once the Attorney General has dealt with the report, we will then publish an [inaudible] permission to do so and we’ll publish it with the response. At that point, I think it will be possible for the Tanaiste to answer your questions in more detail.

“What I can say is that the Office of Director of Corporate Enforcement, the ODCE, has got additional resources the last year and, indeed, the office has got several additional staff and I think too often in this country, a lack of resources is used as an excuse for poor performance which is why so often additional resources don’t make any difference in terms of outcomes and performance.

“As a Government and as a Taoiseach, I’ve expressed my view very clearly that I don’t think that our capacity to respond white collar crime and corporate fraud is adequate and for that reason I’ve asked Minister Fitzgerald and Minister Flanagan to work together with their departments to develop a package of measures to go to Cabinet by the end of September which will enable us to strengthen and deepen our response to white collar crime, to corporate fraud and I think that’s necessary, I think people demand it and I think if we’ve any chance in restoring confidence in the State’s ability to deal with such issues, we need to do exactly that.”

“In 2013, the department were made aware that the documents were shredded, 2013. And that was just before the trial commenced. And I’m sure that same information would have gone to the DPP and would we have had the longest running criminal trial in the history of the State if they had that information?

“I asked you very specific information. The question, when it was posed in 2013, we were told that, the reply that I got was, if resources were requested they would be provided. Well now compare that to the reply that Deputy Shortall got, when she posed the question in 2013, and had to follow it up with other questions in relation to how many staff were there, when it was going to be augmented? It took a very long time, in fact I think it took before last year before they had their whole complement of staff, so that’s two years. Now, I asked you very specific questions in relation to how you can resolve that conflict. That’s an issue in its own right irrespective of a report going to the AG where you have a department that tells you two different things, both of them can’t be right because they’re the opposite end of the spectrum. Could you please address that issue and do you have confidence or do you believe that you were misled by the Office of Director of Corporate Enforcement?”

Varadkar: “I don’t have an answer to that question. I haven’t any dealings yet with the Officer of Director of Corporate Enforcement. So, I can’t say they misled me because certainly I’ve had no dealings with them as Taoiseach, over the past [inaudible] days and I didn’t have in my previous weeks either so I don’t believe they misled me but if you’ve a question, ask them to the line minister, I imagine he’ll do that in the normal way…”

16 thoughts on “‘Does The Taoiseach Believe The Government Was Misled By The ODCE?’”