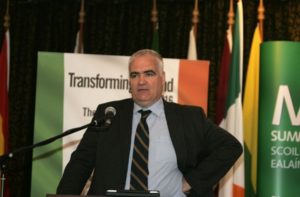 The Labour Party has seven seats to Solidarity-PBP’s six. If we combine, as Mr Whelan does in his article, Solidarity-PBP’s seats with those of the Independents 4 Change grouping and other left-wing TDs, the left comfortably outnumbers Labour.

Yet Noel Whelan does not call Labour small fish or “fringe deputies”.

The thuddingly dull comparison between Donald Trump and the left, as constant in your newspaper as the Angelus, on the basis of criticism of the mainstream media, is fatuous.

It should not need to be said that the basis and method of the left’s critique of certain sections of the media differs ever so slightly from Mr Trump’s lying, egomaniacal Twitter outbursts against CNN.

Your columnist manages class snobbery and reverse class snobbery in the one paragraph, suggesting that the kind of people who vote left are not natural Irish Times readers and, heaven forbid, that some left-wing TDs have the temerity to have been born to middle-class backgrounds.

I can assure him that many supporters of the left of all classes read this newspaper, either as its de facto status as the paper of record or as a means to keep abreast of the latest fashionable delusions of the bourgeois hive-mind, of which Noel Whelan is such a stalwart proponent.

11 thoughts on “‘As Constant In Your Newspaper As The Angelus’”